THE INVISIBLE MAN by H.G. Wells 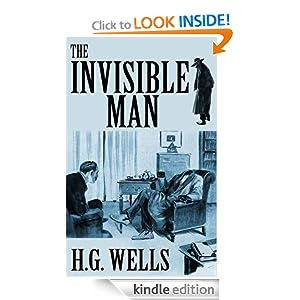 The Definitive Edition of THE INVISIBLE MAN by H.G. WELLS
-Illustrated with 60 beautiful images from the first illustrated edition
-Complete, unabridged, and formatted for kindle to improve your reading experience
-Linked table of contents to reach your chapter quickly

“A corking good read! Just great old-fashioned yarning! Being invisible isn't nearly as much fun as it sounds. In fact it's downright inconvenient. And hazardous, to boot. " Jeanette

“I recommend The Invisible Man to fans of sci-fi novels, because this is classical sci-fi! Not to mention, the "Father of Sci-Fi" wrote this story. Wells filled this story with chaos, suspense, insanity, and curiosity pickers, making the book quite a page turner.” Rebecca

“The Invisible Man is the story of an unfortunate scientist Griffin, whose desire for power and fame led him to madness and ultimately to his demise. I could almost feel the fear when Griffin was terrorizing the village using his invisible self. I also felt the pain and agony The Invisible Man was suffering from. There were times I became sympathetic to Griffin and there were times I wanted to slay him as well. The dark narrative style is brilliantly executed by Wells. It keeps the pressure on your chest when you're into this book. A very good read indeed.”-Mohammed

"In The Invisible Man, a scientific advance dredges up the darkness at the soul of a scientist named Griffin. Much of the book’s early section deals with the difficulties that even an invisible man has. It’s as much comedy as science fiction, and Wells—a writer who usually knows how to keep high-concept storytelling grounded in recognizably human characters—has a pretty good command of small-town types.”-AVClub.com

THE INVISIBLE MAN features the brilliant novel by H. G. Wells in a specially designed edition for kindle. This classic novel, which has been made into countless films and TV shows, will intrigue and delight you. Read it as it’s meant to be read: complete, and unabridged with 60 images from the first illustrated edition.
Posted by NOT SO NOBLE BOOKS at 10:58