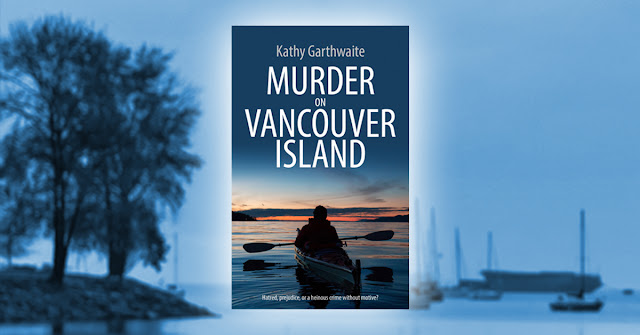 MURDER ON VANCOUVER ISLAND, a mystery by Canadian author Kathy Garthwaite.
Amazon UK: https://amzn.to/2JKqVjp
Amazon US: https://amzn.to/2uxfmln
The peace of a frosty morning is shattered when a man finds a colleague’s battered body. Detective Inspector William Gibson of the Vancouver Island police investigates…
The victim is found by a maintenance worker on the university campus. Despite being brutally murdered, there is a little other evidence; just a blood-spattered baseball bat and a condom placed under the body.
When the police discover that the victim, Robbie Spencer, was a closet homosexual, DI Gibson becomes convinced it was a hate crime.
However, co-workers are apparently nonplussed by the events, regarding the investigating officers with suspicion and disdain. Is the perpetrator one of them?
Gibson concentrates on a party held at the university the night before, one that he in fact attended. A fight had broken out between the guests. Can the two events be linked?
MURDER ON VANCOUVER ISLAND is free with Kindle Unlimited and coming soon in paperback. The sequel, MURDER AT LAKE ONTARIO, also featuring DI William Gibson, will be available soon on Kindle.
If you enjoy crime fiction by Melinda Leigh, Rachel Caine, and Kendra Elliot, you’ll love this atmospheric murder mystery set against the stunning backdrop of Canada’s west coast.

Posted by NOT SO NOBLE BOOKS at 08:17 No comments: 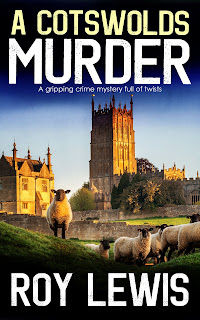 Discover Inspector Crow of Scotland Yard. Enjoy a beautifully told story from a time before smart phones and DNA testing. Full of twists and turns, this will have you gripped from start to finish.THIS BOOK WAS ORIGINALLY PUBLISHED AS “A PART OF VIRTUE.”MURDER AMIDST THE COTSWOLDS BEAUTYChuck Lindop is found with his head bashed in at the caravan site he manages. He was a charming man, but something of a rogue.Inspector Crow arrives in the idyllic Cotswolds to find out who killed him. There had been a lot of comings and goings at the caravan park and many of those involved didn’t like Chuck. And was Chuck involved in a recent outbreak of burglaries? There’s also the problem that the area was full of visitors for Stowford fair.Who wanted Chuck dead and why?A fiendish mystery for Detective Crow to solve in his inimitable way.Set in England in the early 70s, this is the sixth book to feature Inspector John Crow. More coming soon.DISCOVER YOUR NEXT FAVOURITE MYSTERY WRITERPerfect for fans of Peter James, Ruth Rendell, P.D. James and Peter Robinson.Roy Lewis is one of the most critically acclaimed crime writers of his generation.PRAISE FOR ROY LEWIS MYSTERIES“Each Lewis seems to better the last. Here is an intriguing puzzle and likely police work and a fine picture of Northumbrian society and countryside” The Times“Roy Lewis has demonstrated an enviable range both in geography and style…a nice neat story” The Financial Times“Lots of cunning complications embracing conservation and financial fiddles” The Guardian“A thorough, unpretentious and immensely solid piece of work with an interesting and likeable hero” Times Literary Supplement“Chilly drama with some stirring cliff hanger” Sunday TelegraphTHE DETECTIVESkeletally-built, mild-mannered Inspector John Crow is established in the Murder Squad in London and constantly meets hostility when he is called upon to work on murder cases in regional crime squads in Wales and the Midlands. He displays strong moral feelings, and a sensitivity which brings him into conflict with regional staff as he doggedly and successfully pursues the truth in cases where he is called in.INSPECTOR CROW BOOKSBook 1: A LOVER TOO MANYBook 2: ERROR OF JUDGMENTBook 3: THE WOODS MURDERBook 4: MURDER FOR MONEYBook 5: MURDER IN THE MINEBook 6: A COTSWOLDS MURDERMORE COMING SOON!
Posted by NOT SO NOBLE BOOKS at 03:32 No comments:

NEW RELEASE: HE WILL KILL by Charlie Gallagher 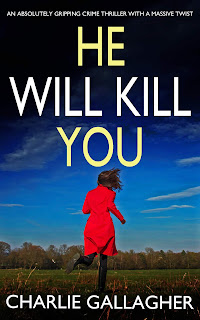 https://www.amazon.co.uk/absolutely-gripping-crime-thriller-massive-ebook/dp/B07PGJL6YS/ UK £0.99https://www.amazon.com/absolutely-gripping-crime-thriller-massive-ebook/dp/B07PGJL6YS/ USA $0.99https://www.amazon.com.au/absolutely-gripping-crime-thriller-massive-ebook/dp/B07PGJL6YS/ AUS 0.99https://www.amazon.ca/absolutely-gripping-crime-thriller-massive-ebook/dp/B07PGJL6YS/ CAN 0.99DISCOVER AN ABSOLUTELY GRIPPING RACE-AGAINST-TIME THRILLER FROM BEST-SELLING AUTHOR CHARLIE GALLAGHER. MEET DETECTIVE MADDIE IVES IN THIS NEW SERIES THAT WILL HAVE YOU GRIPPED FROM THE EXPLOSIVE START TO ONE OF THE MOST SHOCKING ENDINGS OF THE YEAR.Grace Hughes is effectively a prisoner in her own home. Tortured and controlled by her horrifically violent partner, she dreams of freedom, of safety — even happiness.CAN MADDIE GET HER SAFE?IF SHE DOESN’T, HE WILL KILL HER.Detective Maddie Ives now works with a team specialising in getting abused women to safety. She tells Grace to keep a diary, to write everything down so it forms part of the compelling evidence needed to send her abuser to prison. But Maddie also faces a car bomber who threatens to strike again. DI Harry Blaker returns from injury. Can he and Maddie stop the bomber, find a killer and get Grace safe — whether she helps herself or not?GRACE’S TIME IS RUNNING OUT. SHE MUST RUN OR DIE.HE WILL KILL YOU: The new unputdownable thriller from Charlie Gallagher. Maddie Ives’ toughest case yet.Perfect for fans of Kimberley Chambers, Damien Boyd, Rachel Abbott, Patricia Gibney or Mark Billingham.THE AUTHORCharlie Gallagher has been a serving UK police officer for ten years. During that time he has had many roles, starting as a front-line response officer, then a member of a specialist tactical team and is currently a detective investigating serious offences.ALSO BY CHARLIE GALLAGHERMADDIE IVESHE IS WATCHING YOUHE WILL KILL YOULANGTHORNE POLICE SERIESBook 1: BODILY HARMBook 2: PANIC BUTTONBook 3: BLOOD MONEYBook 4: END GAMEMISSINGTHEN SHE RANHER LAST BREATHRUTHLESS
Posted by NOT SO NOBLE BOOKS at 03:55 No comments:

Posted by NOT SO NOBLE BOOKS at 03:45 No comments: 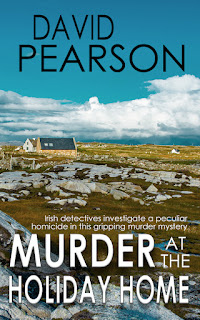 MURDER AT THE HOLIDAY HOME a gripping mystery by David Pearson.

A woman is found dead in a local businessman’s holiday let. Detectives uncover some shady dealings. But did he kill her?


The charm of a West of Ireland holiday home is somewhat tarnished when a woman’s body is found in the property. There are few clues as to her identity. However, in her hand is found a small solid-gold ingot.

Galway-based DI Maureen Lyons is drawn out to the sticks to take on the case. Suspicion naturally falls on the property’s owner who runs a large discount store, lives beyond his means, and has an over-zealous interest in the ladies.

But the team find it difficult to establish a motive and it is only when the investigation follows the money that a picture begins to emerge. This is one of corruption that spreads across Europe, from Ireland, through Holland, all the way to Lithuania and beyond.

With the help of a Dutch inspector, Lyons will piece together an elaborate criminal scheme worth millions. But it will also bring her up against individuals who kill at the drop of a hat to further their aims.

This is the seventh murder mystery featuring detectives Hays and Lyons set in the Galway region of Ireland. It can be enjoyed entirely as a standalone, but why not check out the other books in the series? These are, in order of publication:

All of these books are FREE with Kindle Unlimited and available in paperback.
Posted by NOT SO NOBLE BOOKS at 10:25 No comments: 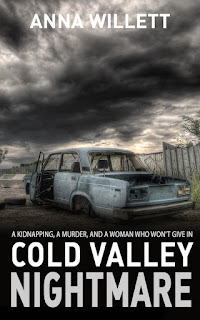 A troubled past resurfaces when an investigative journalist agrees to help find a missing child.


The Australian bush is unforgiving, and there is not much hope when a four-year-old boy, Clem, apparently disappears into it without a trace. When the police begin to suspect the boy’s step-father, his lawyer hires Damon, a specialist private investigator, to help defend him.

No stranger to missing person cases, Damon agrees to let his partner, Lucy, interview the family. There she finds a strong connection to the boy’s mother, and determines to find Clem no matter the cost. Having lost her own parents young, and nearly lost her brother, she hopes it will help her to exorcise her own demons.

Refusing to believe that Clem is dead, Lucy begins a search that will take her into the seedier side of a rural community with many secrets. In so doing, she will stumble across criminal activity that will put her in serious danger.

But it will also stretch her fledgling relationship to Damon, the only person she has ever really trusted. Can she find Clem? Can she find an inner peace? Can she let Damon in?

If you enjoy suspense thrillers you are in for a treat with COLD VALLEY NIGHTMARE. It is a standalone, but you can also read about Lucy’s backstory in the bestseller SMALL TOWN NIGHTMARE, which is FREE with Kindle Unlimited and available in paperback.

Anna Willett is the author of several crime thrillers set around Perth in the south west of Australia. The rugged, uncompromising landscape is a graphic backdrop for stories that explore tested relationships, cruelty and revenge, and human resolve.
Posted by NOT SO NOBLE BOOKS at 10:22 No comments: 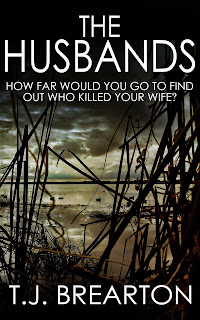 THE HUSBANDS by TJ Brearton HALF PRICE FOR LAUNCHhttps://www.amazon.co.uk/HUSBANDS-would-find-killed-your-ebook/dp/B07P5GXKC6/ UK £0.99https://www.amazon.com/HUSBANDS-would-find-killed-your-ebook/dp/B07P5GXKC6/ USA $0.99https://www.amazon.com.au/HUSBANDS-would-find-killed-your-ebook/dp/B07P5GXKC6/ AUS 0.99https://www.amazon.ca/HUSBANDS-would-find-killed-your-ebook/dp/B07P5GXKC6/ CAN 0.99THE HUSBANDS by TJ BreartonA BREATHTAKING CRIME THRILLER FULL OF SHOCKING TWISTS AND TURNSHe kills their wives. He destroys their families.Then he comes after the husbands.“Do you want to know who killed your wife?” he asks.Kelly Roth, FBI profiler, returns home to Syracuse to stop a sadistic serial killer.Three murders in three separate jurisdictions in central New York State have the same pattern: women killed by fatal headshots from a hunting rifle. Kelly Roth is sent from Virginia to help the local police.Each victim was found murdered in a remote area or in a quiet park. The media call him “The Park Killer.” But Kelly doesn’t think the killer lurks in the bushes. She thinks he hunts his victims somewhere else.Is he really contacting the bereaved husbands or is this just someone playing a sick game?Kelly will risk her own life in a heart-stopping race against time to stop more murders and find out the truth.HOW FAR WOULD YOU GO TO DISCOVER WHO KILLED YOUR WIFE? If you like Jeffery Deaver, Linwood Barclay, Lisa Unger, Kendra Elliot, or JD Robb you will enjoy this compelling new mystery novel.The book is set in New York State, an area the author brings to life with compelling detail based on his local knowledge.ALSO BY BEST-SELLING AUTHOR T.J. BREARTONHABITSURVIVORSDAYBREAKBLACK SOULDEAD GONETRUTH OR DEADGONEDARK WEBDARK KILLS
Posted by NOT SO NOBLE BOOKS at 03:45 No comments: