NEW RELEASE: only 99p/$0.99 for a limited time. This one is really tense! PANIC BUTTON 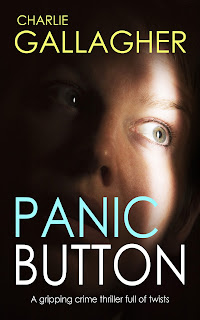 “A man is standing in front of me with a gun. He has a message for me and for us all. He says that he will come for us. He will come for all of us, one by one. Until it is finished.”

Police Constable Matthew Riley is called to an emergency on a blazing hot day in Langthorne. He is forced to read out these words live on police radio. Then he is shot dead.

One of the tensest, most authentic police thrillers you will read this year. Full of twists and turns, you won’t want to put this down until the shocking conclusion.

Someone is killing the officers of the Langthorne Police one by one. And in a sadistic twist he makes each victim push their radio panic button before they die, thus broadcasting their last moments to the entire force.

And as the police face this ruthless adversary, Detective George Elms is in no fit state to help. He can barely keep his life together and is desperate to sort things out with his estranged wife and daughter. What is the connection between ruthless former officer Ed Kavski and the wave of killings? And can their boss Helen Webb do anything to stop the carnage?

Authentic, fast-paced, and with a touch of black humour, PANIC BUTTON will have you gripped from start to finish as George Elms fights to save the only people he still cares about, his wife and daughter.

PANIC BUTTON is the stunning sequel to the best-selling BODILY HARM.

If you like Angela Marsons, Rachel Abbott, Ian Rankin or Mark Billingham you will be gripped by this exciting new crime fiction writer.

Detective George Elms has lost almost everything. Now they will try to take away the little he has left.

THE SETTING
Langthorne is typical of many smaller seaside towns dotted around the UK's coastline. Once a thriving tourist destination, where the affluent built grand seafront houses, it has suffered a hard fall from grace. Unemployment has blighted the area and so has crime.

THE DETECTIVE
George Elms joined the police pretty much straight out of school and is now in his mid-thirties. He’s been getting in the faces of criminals for over fifteen years. Well-known and respected on both sides of the line, he was responsible for running a team working the crimes coming out of one of the county’s most notorious housing estates. He is married to Sarah and they have a little girl.