NEW RELEASE: MURDER ON THE BOAT BY JANE ADAMS 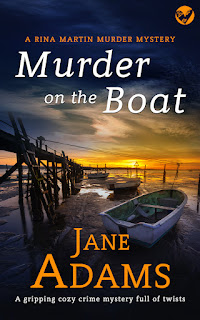 NEW RELEASE: THE CASE OF THE KILLER GAME SHOW BY MICHAEL LEESE 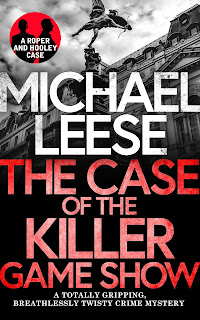 NEW RELEASE: THE RING OF DEATH BY SALLY SPENCER 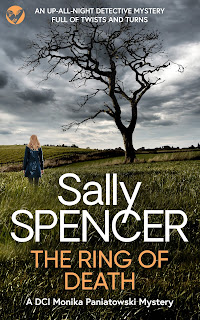 Good morning! Joffe Books have everything you need to get your Black Friday weekend off to a flying start, with an unmissable offer on a brilliantly twisty new detective mystery from an internationally-acclaimed author.
Sally Spencer's new mystery, THE RING OF DEATH, is available now for the special launch price of just 99p | 99c, and offers twist after twist to keep you guessing until the final pages.Discover the brand-new novel from a crime fiction talent who has drawn comparisons with Ian Rankin, John Harvey and Colin Dexter.⭐⭐⭐⭐⭐ “One of the best police procedurals around. Spencer proves again that she is in league with Peter Turnbull and Lynda La Plante.” Library Journal⭐⭐⭐⭐⭐ “Belongs in the same league with Rebus." Booklist
OUT NOW
UK 99P: https://www.amazon.co.uk/dp/B09MKW4XX6
US 99C: https://www.amazon.com/dp/B09MKW4XX6
CA 99C: https://www.amazon.ca/dp/B09MKW4XX6
AU 99C: https://www.amazon.com.au/dp/B09MKW4XX6
Meet Monika Paniatowski, an ambitious new DCI with everything to prove — and everything to lose.Detective Monika thought she’d seen it all. But nothing could prepare her for this.A naked body out on the wild and windswept Lancashire moors.He’s been dumped here, but he was never supposed to stay hidden.Whoever killed him went to great lengths to see to that. First, they slit his throat, then they left him on display. Posed on all fours.Who would go to the trouble?It’s up to Monika to find out, with the help of her team. Too bad they’re all still wet behind the ears or — in the case of DS Paul Cousins — fresh from psychiatric leave.Worse still, Monika’s arch enemy is in town and watching her every move.Then a second naked body turns up, arranged in exactly the same way.Monika realizes that, whatever the killer’s twisted message, he won’t stop until he’s understood.Discover a brilliantly twisty mystery series set in the 1970s — when it was tough to be a woman in a man’s world.Fans of Rachel McLean, Angela Marsons, Jodie Lawrance, D.S. Butler, Lynda La Plante, Rebecca Bradley and Caro Ramsay will devour this thrilling crime series.WHAT EVERYONE IS SAYING ABOUT THE MONIKA PANIAKOWSKI MYSTERIES:⭐⭐⭐⭐⭐ “Hugely entertaining!” Booklist⭐⭐⭐⭐⭐ “A witty protagonist and a likeable supporting cast” Publisher’s Weekly⭐⭐⭐⭐⭐ “The plot twisted and turned, and kept me wanting more!” Margaret B.⭐⭐⭐⭐⭐ “One of the best police procedurals around. Spencer proves again that she is in league with Peter Turnbull and Lynda La Plante.” Library Journal⭐⭐⭐⭐⭐ “Monika carries the torch nobly as Spencer’s franchise keeps its edge.” Kirkus⭐⭐⭐⭐⭐ “Belongs in the same league with Rebus, Resnick, Harpur and Iles, Morse et al.” Booklist⭐⭐⭐⭐⭐ “Heartbreaking and heart-wrenching, this is Spencer at her best.” Library JournalTHE DETECTIVEDCI Monika Paniatowski is smart, ambitious and damaged. Her sergeant started a rumour she landed her post by sleeping her way to the top. But the truth is Monika — a Polish immigrant with a long and traumatic backstory — has had to work twice as hard as any of the resentful male colleagues currently betting against her. Will her flawless instincts be enough to win them round?THE SETTINGWhitebridge was once a thriving Northern mill town — with canals crisscrossing through it — where everyone looked to the mills for employment and business opportunities. In the 1970s, it is a place in decline, where the social fabric is ripping apart.DCI MONIKA PANIATOWSKI MYSTERIESBook 1: THE DEAD HAND OF HISTORYBook 2: THE RING OF DEATH
Posted by NOT SO NOBLE BOOKS at 03:24 No comments: 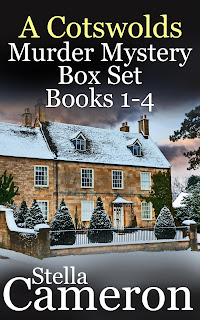 Happy Thanksgiving everybody!At Joffe Books, we are celebrating by offering a bountiful box set bargain of FOUR atmospheric village mysteries set in the snowy Cotswolds for just 99p | 99c — guaranteed to keep you turning the pages late into the night.
Packed with gripping mystery, intrigue and romance, New York Times bestselling author Stella Cameron's A COTSWOLDS MURDER MYSTERY BOX SET BOOKS 1-4 is available now with 80% off and is the perfect cosy read for the festive season.Introducing the character of the irrepressible small-town sleuth Alexi Duggins, this is essential reading for fans of Faith Martin, Agatha Christie, Frances Evesham and Clare Chase.“A fearless, feisty heroine, a touch of romance, and an intriguing look at English village life, combined with taut suspense and unexpected twists.” Booklist
OUT NOW
UK 99P: https://www.amazon.co.uk/dp/B09MJKKWDJ
US 99C: https://www.amazon.com/dp/B09MJKKWDJ
CA 99C: https://www.amazon.ca/dp/B09MJKKWDJ
AU 99C: https://www.amazon.com.au/dp/B09MJKKWDJ
Looking for gripping cozy mysteries with a feisty female sleuth? Then meet Alex Duggins in this addictive series from a bestselling author.GET **FOUR** ATMOSPHERIC VILLAGE MYSTERIES IN ONE GREAT-VALUE BOX SET.Perfect for fans of Faith Martin, Agatha Christie, Frances Evesham, J.R. Ellis and Clare Chase.Stella Cameron is a New York Times and USA Today bestselling author with over 14 million copies of her books in print.____________________WHAT PEOPLE ARE SAYING ABOUT THE ALEX DUGGINS MYSTERIES:“A fearless, feisty heroine, a touch of romance, and an intriguing look at English village life, combined with taut suspense and unexpected twists.” Booklist“A thrilling conclusion, combined with cliffhanger chapter endings, guarantees readers will be flipping the pages late into the night.” Library Journal“Stella Cameron masterfully weaves a good old-fashioned village mystery with a grisly murder, suspects galore, and compelling intrigue.” New York Times bestseller Robert Dugoni“An appealing heroine and an atmospheric setting make this romantic mystery a winner.” Publishers Weekly⭐⭐⭐⭐⭐ “Start to finish this author doesn't disappoint.” Ann S.____________________IN THIS FOUR-BOOK BOX SET:FOLLYFollowing the breakdown of her marriage, Alex Duggins has returned to the village of Folly-on-Weir in the Cotswolds for a fresh start. But on a wintery walk in the hills above Folly, Alex stumbles across a frosted corpse buried in the snow and finds herself top of the suspect list. Can she clear her name and find the real murderer? Or will Alex be the next snow-covered body to be found in the beautiful hills above the town?OUT COMES THE EVILAn almost fresh body is discovered in the disused well of a ruined fourteenth century manor house. The victim was a widow who had lived quietly in Folly-on-Weir for the past ten years. Who on earth could want her dead, and by such brutal means? Once again, amateur detective Alex Duggins and her veterinarian friend Tony Harrison are thrown into a major murder investigation.MELODY OF MURDERVillage sleuth Alex Duggins hears singing coming from the church and finds herself drawn to a girl’s beautiful voice. Suddenly the singing stops and Alex hears a loud crash. Alex races in and finds the girl sprawled on the floor. She is already dead. Who wanted the girl dead and why? A sly, clever perverted killer is on the loose in the village. Can Alex help stop any more deaths?LIES THAT BINDA woman’s body is found in the woods. No one knows who she is or why she was left in such a dreadful state. Alex Duggins is determined not to get involved — for once. But the person who found the gruesomely mutilated body was young Kyle Gammage, who helps out at Alex’s friend Tony's veterinary clinic. To protect Kyle and his elder brother, Alex withholds vital information from the police. It's a misjudgement that will have far-reaching — and possibly fatal — consequences.YOU GET ALL FOUR OF THE ABOVE BOOKS IN THIS EDITION. DON'T MISS OUT ON THIS ADDICTIVE SERIES.____________________MEET ALEXPeople think Alex is the perfect girl-next-door, but she’s made of sterner stuff than most girls-next-door. Divorced pub owner and graphic artist, she meets challenges head on, especially when she decides to stand up for justice and the underdog. Alex is no stranger to trouble, never has been since she was a scrappy young girl with no dad and a mum working around the clock to keep them together.THE ALEX DUGGINS MYSTERIESBook 1: FOLLYBook 2: OUT COMES THE EVILBook 3: MELODY OF MURDERBook 4: LIES THAT BINDBook 5: WHISPER THE DEADBook 6: TRAP LANEBook 7: THE PLAYING FIELDS
Posted by NOT SO NOBLE BOOKS at 05:00 No comments:

NEW RELEASE: STALKER ON THE LEVELS BY DAVID HODGES 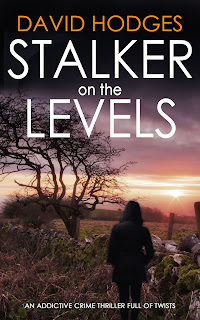