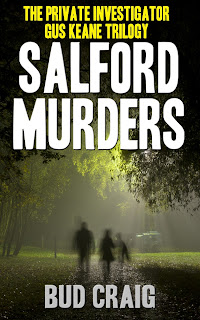 SALFORD MURDERS by Bud Craig: All three books in one!


With the atmosphere of urban decline and inner-city violence, these three murder mysteries are set in the metropolitan area of Salford, Manchester - one of the most deprived areas in England.

Ex-rugby player turned social worker Gus Keane is a man who, faced with the disinterest of the Police, becomes a private investigator in order to find out who murdered his boss. Not surprisingly, law enforcement don't want someone meddling in the case, but increasingly they turn to Keane's local knowledge to bring the culprit to justice.

Three related detective mysteries in one bumper volume on Kindle
As reviewers have remarked, these books form a trilogy but each can be read on its own, without having read the others. This is partly because Gus Keane is an immediately likeable detective: he has his faults, and is always getting into trouble; but he has a way of getting the truth out of people and, hardened to the rough world of Salford, his local knowledge is key.

THE THREE BOOKS IN THE TRILOGY

Ex-rugby football player turned social worker Gus Keane is getting ready for retirement when his boss gets murdered. Finding himself under suspicion, Keane turns private detective to find out the truth. But when he closes in on the killer will Keane come out on top or fall victim to the murderer’s desperate moves?

If something happens in Salford, Manchester, it is generally bad news and when two dead bodies turn up within a few hours of one another, it is no exception. With the local force stretched to the limits and firing blanks ex-rugby player Gus Keane is asked to step in to help find the culprits. What follows is an ever thickening plot as Keane gradually begins to unravel a mystery from Salford's shady past.

FALLING FOUL: Private investigator Gus Keane is back with a difficult new case to solve
With his ex-wife appearing back on the scene and relations with his girlfriend Marti troubled, the murder of one of Gus Keane's colleagues comes at a really bad time. Yet when his friend Jimmy is accused of the murder, he really must step up to the plate. With his knowledge of the local area, and a healthy suspicion that nothing anyone says is true, private investigator Keane must find the killer before Jimmy is convicted.

These books are also available as individual titles on Kindle and are FREE on Kindle Unlimited.
Posted by NOT SO NOBLE BOOKS at 04:20 No comments: