NEW: THEN SHE RAN by Charlie Gallagher 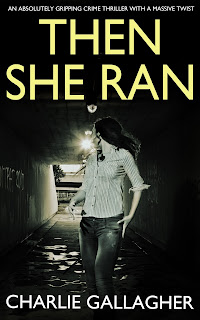 UK  https://www.amazon.co.uk/dp/B07CKPDZDZ/USA https://www.amazon.com/dp/B07CKPDZDZAUS https://www.amazon.com.au/dp/B07CKPDZDZ/CANADA https://www.amazon.ca/dp/B07CKPDZDZ/What readers are saying about THEN SHE RAN“What an exciting read with a brilliant twist!” Lynne“It speeds along before you can draw breath.” Carole“This is a can’t miss book.” Claudia“Keeps you guessing and unable to put down.” Viv“Great story with action on almost every page.” Nerys“A brilliantly written, fast-paced crime thriller.” GretaTHEN SHE RAN by Charlie GallagherDiscover a gripping crime thriller which will have you gripped from the explosive beginning to one of the most surprising endings of the year. On a lazy Sunday morning Jenny Harris is shaken awake by her panic-stricken boyfriend, Joseph. Their baby daughter lies asleep on her chest. ‘We’ve got to go!’ Joseph screams. In their hotel room, Jenny hurriedly wraps her tiny baby up. All their belongings are left behind. There’s no time. Joseph’s panic is contagious.  Jenny sprints with her family from the hotel. And it’s clear that they are being chased. Their pursuers are indiscriminate and they are deadly. Her boyfriend falls, caught up in the carnage, but he manages to give her one last message: RUN!’  Detective George Elms is investigating a separate crime: an elderly woman shot in the stomach during a robbery gone wrong. She is left for her dead in her country kitchen where she stood firm against violent thieves. What’s the link between the two incidents? And who will do anything to silence Jenny forever? George’s only option is to make ground on both cases. And he must move fast. Because everyone is in deadly danger and time is running out. Perfect for fans of Kimberley Chambers, Damien Boyd, Rachel Abbott, Patricia Gibney or Mark Billingham. THE AUTHORCharlie Gallagher has been a serving UK police officer for ten years. During that time he has had many roles, starting as a front-line response officer, then a member of a specialist tactical team and is currently a detective investigating serious offences. ALSO BY CHARLIE GALLAGHERLANGTHORNE POLICE SERIESBook 1: BODILY HARMBook 2: PANIC BUTTONBook 3: BLOOD MONEYBook 4: END GAME MISSINGRUTHLESS
Posted by NOT SO NOBLE BOOKS at 05:40 No comments: 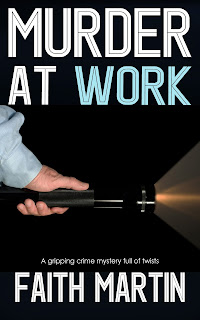 MURDER AT WORK by Faith MartinUK https://www.amazon.co.uk/MURDER-gripping-crime-mystery-twists-ebook/dp/B07C24JNVW/ 99pUSA https://www.amazon.com/MURDER-gripping-crime-mystery-twists-ebook/dp/B07C24JNVW/ $0.99AUS  https://www.amazon.com.au/MURDER-gripping-crime-mystery-twists-ebook/dp/B07C24JNVW/ 0.99CANADA https://www.amazon.ca/MURDER-gripping-crime-mystery-twists-ebook/dp/B07C24JNVW/ 0.99MURDER AT WORK by Faith MartinLooking for a brilliant best-selling murder mystery with a feisty female detective? Meet DI HILLARY GREENE, a policewoman struggling to save her career and catch criminals. Hillary will retire in a few weeks. But can her boss get Hillary to change her mind by putting her on a murder investigation? The victim is found dead with his head bashed in with a piece of wood. Michael Ivers was a gambler and a notorious womaniser. He had few friends and there is a long list of people who might have wanted him dead. Hillary wants to solve her final case as a police officer and she has just days left to find out who killed him. To add to her problems, her old enemy, ex-Sergeant Frank Ross is back on the scene and is a prime suspect. This is a crime mystery full of well-observed characters, which will have you gripped from start to the absolutely thrilling conclusion. MURDER AT WORK is the eleventh in a series of page-turning crime thrillers set in Oxfordshire. THE LOCATIONA small industrial/business unit on the outskirts of a large market town. It has six units, including a scrap-metal yard, a builders’ yard, a shoe warehouse, a newspaper delivery depot, a garden supplies unit and an auto repair shop. Modern but unattractive, it is a small working community, where everyone knows everyone else, and most workers eat in a small on-site café. THE DETECTIVEDI Hillary GreeneAn attractive woman in her forties, Hillary Greene is a police officer of many years’ experience, and came up through the ranks. Consequently, she knows how the system works, and is fiercely loyal to the force without being blinkered to its faults. Popular with the rank and file for her no-nonsense attitude and competence. PLEASE NOTE THIS IS A REVISED EDITION OF A BOOK FIRST PUBLISHED AS “A NARROW EXIT.” DI HILLARY GREENE SERIESBOOK 1: MURDER ON THE OXFORD CANALBOOK 2: MURDER AT THE UNIVERSITYBOOK 3: MURDER OF THE BRIDEBOOK 4: MURDER IN THE VILLAGEBOOK 5: MURDER IN THE FAMILYBOOK 6: MURDER AT HOMEBOOK 7: MURDER IN THE MEADOWBOOK 8: MURDER IN THE MANSIONBOOK 9: MURDER IN THE GARDENBOOK 10: MURDER BY FIREBOOK 11: MURDER AT WORK THIS IS NOT HILLARY’S LAST CASE. SHE WILL RETURN TO INVESTIGATE MORE FIENDISH CRIMES. Books 12-17 coming soon!Join the Joffe Books mailing list to be the first to hear about newreleases.
Posted by NOT SO NOBLE BOOKS at 05:02 No comments: 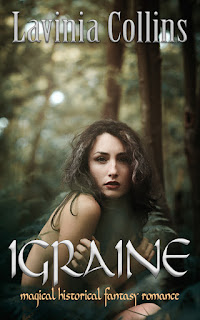 The epic tale of a woman who will use all her power to protect her son and make him King.

This collection of three books tells the story of King Arthur’s mother, Igraine, the conflict over the future king’s destiny between her and Merlin, and the struggle within a post-Roman Britain to mix past with present, Christianity with paganism, and magic with politics. Igraine is no passive bystander at court but a powerful political player, a wise and influential queen who reflects the strength and tenacity of the women of ancient Britain. Igraine's life has never before been told in detail. This is her story.

The Cornish Princess
The King of Britain is dead, without a male heir. The politics of her country never mattered much to Igraine, until now, when they threatened to rob her of her home. When the witch Merlin tells her destiny will make her queen, a defiant Igraine refuses an offer of marriage from Uther, a rough soldier and unlikely pretender for the throne, but destiny cannot be avoided and the harder she fights it, the more brutal it will be when it comes.

The Prisoner Queen
Freshly widowed, with a child she can’t possibly have in safety and two grieving daughters, Igraine must negotiate the dangerous politics of a court in turmoil, unsure of if she is its new queen or a prisoner. With Uther’s promises not yet kept, and him slipping further under Merlin’s control, to protect her unborn child, her daughters and the home she has left behind, Igraine is forced to make deals with friends she knows are not to be trusted.

Mother of the King
With her son lost and Merlin back at court, Igraine fights for control of the kingdom. Uther is broken by grief, weakening and dying, and Igraine is locked in a conflict with the wizard over the destiny of her son. In this battle there can be only one survivor, and Igraine has not survived the dangers of court to give up now.

If you enjoy epic fantasy adventures like Game of Thrones, with a romantic twist, this book is for you.
Also available as three separate titles on Kindle. Coming soon in paperback.
FREE with Kindle Unlimited.

Posted by NOT SO NOBLE BOOKS at 03:05 No comments: