NEW RELEASE: FIRE ON THE FENS by Joy Ellis 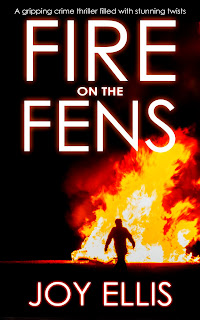 https://www.amazon.co.uk/gripping-thriller-filled-stunning-twists-ebook/dp/B07DCX7PJS/ UK launch price £1.99https://www.amazon.com/gripping-thriller-filled-stunning-twists-ebook/dp/B07DCX7PJS/ USA launch price $2.99https://www.amazon.com.au/gripping-thriller-filled-stunning-twists-ebook/dp/B07DCX7PJS AUS launch price $3.99https://www.amazon.ca/gripping-thriller-filled-stunning-twists-ebook/dp/B07DCX7PJS CANADA $3.99What readers are saying about FIRE ON THE FENS“Just wonderful to read.” Carole“Holds the reader’s attention from the first word to the last.” Nicki Richards“Compulsive reading, I loved it.” Viv“Riveting tale from start to finish.” Lynne“Absolutely engrossing.” Olga“Brilliant book which kept me gripped from page 1.” BarbaraFIRE ON THE FENS by Joy EllisDo you love gripping detective mysteries? Then try this book by a #1 best-selling author now. You won't be able to put it down. By an author everyone's talking about.Detective Nikki Galena faces a cat-and-mouse battle with a killer arsonist.Someone is lighting fires on the fens. First they target property, but then a body is found at one of the crime scenes.More fires are lit. And at each one a single person dies. But the victims have led spotless lives and apparently there’s no connection between them.Meanwhile, the town is facing a very peculiar threat from a group of sinister Satanists led by a charismatic businessman.Who is burning with anger, and can Nikki stop them before anyone else dies? Full of twists and turns, this is a crime thriller that will keep you turning the pages until the heart-stopping ending.This is book 9 of the international best-selling books featuring Nikki Galena.THE DETECTIVEDI Nikki Galena: A police detective with nothing left to lose, she’s seen a girl die in her arms and her own family destroyed. She’s tough on criminals but fiercely loyal to her team.HER PARTNERDS Joseph Easter is the squeaky-clean member of the team. But his nickname “Holy Joe” belies his former life as a soldier. He has a daughter and an ex-wife who wants his attention.THE SETTINGThe Lincolnshire Fens: great open skies brood over marshes, farmland, and nature reserves. It is not easy terrain for the Fenland Constabulary to police, due to the distances between some of the remote fen villages, the dangerous and often misty lanes, and the poor telephone coverage. There are still villages where the oldest residents have never set foot outside their own farmland and a visit to the nearest town is a major event. But it has a strange airy beauty to it, and above it all are the biggest skies you’ve ever seen.DISCOVER YOUR NEXT FAVOURITE MYSTERY SERIES NOWPerfect for fans of Rachel Abbott, Robert Bryndza, Mel Sherratt, Angela Marsons, Colin Dexter, or Ruth Rendell. ALSO BY JOY ELLISTHE NIKKI GALENA SERIESBook 1: CRIME ON THE FENSBook 2: SHADOW OVER THE FENSBook 3: HUNTED ON THE FENSBook 4: KILLER ON THE FENSBook 5: STALKER ON THE FENSBook 6: CAPTIVE ON THE FENSBook 7: BURIED ON THE FENSBook 8: THIEVES ON THE FENSBook 9: FIRE ON THE FENS JACKMAN & EVANSBook 1: THE MURDERER’S SONBook 2: THEIR LOST DAUGHTERSBook 3: THE FOURTH FRIENDBook 4: THE GUILTY ONES
Posted by NOT SO NOBLE BOOKS at 04:22 No comments:

Murder Never Retires by Faith Martin out today! at a discounted launch pricehttps://www.amazon.co.uk/dp/B07D79CJV4 UK £1.99  LAUNCH PRICEwww.amazon.com/dp/B07D79CJV4 USA $2.99 LAUNCH PRICEhttps://www.amazon.com.au/dp/B07D79CJV4 AUS $3.99 LAUNCH PRICEhttps://www.amazon.ca/MURDER-RETIRES-gripping-mystery-twists-ebook/dp/B07D79CJV4 CANADA $2.99 LAUNCH PRICEWhat readers are saying about MURDER NEVER RETIRES“***** A fantastic read” Olga“Martin's writing is impeccable, and her timing keeps the reader turning the pages feverishly.” Bebe Brechner“Great characters all around with lots of twists and turns.” Linda Strong“I was engrossed from the first page.” Greta“Really enjoyed the book, finished it in a day!” Hannelore Cheney“Great read.” NerysHope you enjoy ItBest wishesRudiMURDER NEVER RETIRES by Faith MartinLooking for a brilliant best-selling murder mystery with a feisty female detective? DETECTIVE HILLARY GREENE IS BACK! And this time she’s going to solve the most difficult cold cases. Hillary Greene returns to Thames Valley Police HQ, acting as a consultant for the Crime Review Team, looking into murders which the police have never been able to solve. She wasn’t sure she wanted to go back. But solving crimes is irresistible for Hillary Greene. And it doesn’t hurt that her new boss is devastatingly handsome. Twenty years ago, mother-of-three Anna McRae was found beaten to death in her kitchen with a rolling pin. She’d been having an affair with her brother-in-law, so the prime suspect was Anna’s sister Debbie. However as Hillary digs deeper, more secrets and betrayals emerge. Who wanted Anna dead and can Hillary finally bring her justice? Meanwhile, Hillary is distracted by an unknown admirer, who quickly seems to be going from suitor to stalker. Can Hillary solve a fiendishly complex case from the past while fending off unwanted attention? This is a crime mystery full of well-observed characters, which will have you gripped from start to the absolutely thrilling conclusion. MURDER NEVER RETIRES is the twelfth in a series of page-turning crime thrillers set in Oxfordshire. THE LOCATIONThe village of Chesterton, just a few miles from the market town of Bicester. With recent development, the village (like many near large towns) is nowadays in danger of becoming a mere ‘suburb’ of its biggest neighbour. Especially since it’s a stones-throw from Bicester Village — the famous high-end designer-label shopping centre that brings large amounts of UK and foreign shoppers. But at the time of the original murder investigation, it was a village like many to be found in rural Oxfordshire. Surrounded by farmland, it was a peaceful, quiet location. Not the sort of place where you’d expect a shocking murder to happenTHE DETECTIVEDI Hillary GreeneAn attractive woman in her forties, Hillary Greene is a retired police detective. She had many years’ experience solving the toughest murder cases, and came up through the ranks. Consequently, she knows how the system works, and is fiercely loyal to the force without being blinkered to its faults. She was popular with the rank and file for her no-nonsense attitude and competence. PLEASE NOTE THIS IS A REVISED EDITION OF A BOOK FIRST PUBLISHED AS “A NARROW RETURN.” DI HILLARY GREENE SERIESBOOK 1: MURDER ON THE OXFORD CANALBOOK 2: MURDER AT THE UNIVERSITYBOOK 3: MURDER OF THE BRIDEBOOK 4: MURDER IN THE VILLAGEBOOK 5: MURDER IN THE FAMILYBOOK 6: MURDER AT HOMEBOOK 7: MURDER IN THE MEADOWBOOK 8: MURDER IN THE MANSIONBOOK 9: MURDER IN THE GARDENBOOK 10: MURDER BY FIREBOOK 11: MURDER AT WORKBOOK 12: MURDER NEVER RETIRES Books 13-17 coming soon!Join the Joffe Books mailing list to be the first to hear about newreleases. 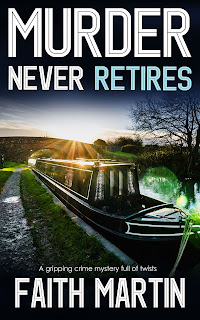 Posted by NOT SO NOBLE BOOKS at 07:34 No comments: 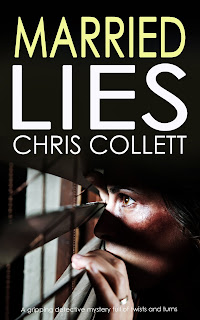 Do you love gripping mysteries with great characters?
Discover Detective Tom Mariner in this critically acclaimed series.
'Collett is a wonderful writer, subtle, clever, strong on atmosphere and character.’ Yorkshire Post
Lucy Jarrett is terrified. Someone is watching her every move, following her home from work and making threatening phone calls. But her husband doesn’t believe her and no one else is listening.
Lucy’s married life is proving anything but blissful. Her musician husband is perpetually away on tour and doesn’t want to start a family.
Lucy finally calls on DI Tom Mariner for help, and he takes her fears seriously because of the recent murder of another young woman by her ex-partner.
Mariner himself is already on the hunt for a sadistic killer. Nina Silvero, wife of an ex-police officer, was duped into sipping sulphuric acid disguised as celebratory wine. Grappling with her apparently motiveless killing, Mariner delegates Lucy’s case to Millie Khatoon.  Is someone out for revenge against the police?

Can DI Tom Mariner track down the stalker and catch the killer before anyone else dies?

Perfect for fans of Peter James, Ian Rankin and Peter Robinson. This is the fifth book in the DI MARINER SERIES, more books coming soon!

THE SETTING
Birmingham is a city of stark contrasts with a rich cultural and historical heritage. Playing a key role in the industrial revolution, it helped shape the nation’s manufacturing industry

But with its many green spaces, Birmingham also borders on the beautiful countryside of Worcestershire and Warwickshire, is just a few miles from Stratford on Avon and a short drive from the wild country of mid-Wales.

Birmingham’s population is large and ethnically diverse, and while urban regeneration has forged a modern and culturally vibrant city, the decaying remnants of the industrial past and 1960s concrete jungle give it a unique and gritty character; the dark underbelly policed by DI Tom Mariner and his team.

THE DETECTIVE
Detective Inspector Tom Mariner is, on the surface, an average dedicated policeman, but his experiences as a younger man have given him an insight into life on the dark side, and a clear sense of right and wrong. Mariner has little interest in material things. He lives in a modest canal-side cottage, enjoys the occasional (real) beer and game of dominoes and drives an old car. He is most at home in the outdoors, with an OS map and a compass, and in times of crisis, will take off and walk for miles in any weather.

THIS IS A REVISED EDITION OF A BOOK FIRST PUBLISHED AS “STALKED BY SHADOWS.” 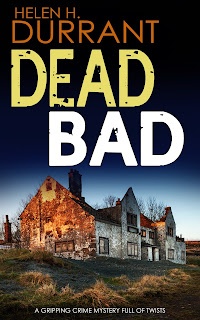 UK https://www.amazon.co.uk/DEAD-gripping-crime-mystery-twists-ebook/dp/B07CY2DNXD/ only 99pUSA https://www.amazon.com/DEAD-gripping-crime-mystery-twists-ebook/dp/B07CY2DNXD/ $0.99AUS https://www.amazon.com.au/DEAD-gripping-crime-mystery-twists-ebook/dp/B07CY2DNXD 0.99CAN https://www.amazon.ca/DEAD-gripping-crime-mystery-twists-ebook/dp/B07CY2DNXDWhat readers are saying about DEAD BAD“As soon as I’d started it I was gripped.” Nerys“The shocking truth is revealed with a surprising ending.” Hannelore Cheney“Brilliant from start to finish.” Susan“Well written and action packed.” Linda Strong“I couldn’t put it down.” BarbaraDEAD BAD by Helen H. DurrantLooking for a brilliant best-selling crime mystery with great detectives? Detectives Calladine and Bayliss face a vicious serial killer in a mystery with a shocking ending. A woman’s body is found in a disused church, a homemade stuffed toy by her side. The victim had been dumped there months ago. The crime has the hallmarks of twenty-year-old case whose alleged perpetrator is in prison. Detective Ruth Bayliss must work out whether a serial killer has returned, or whether a new killer is just taunting the police. Her partner DI Tom Calladine faces the fight of his life to clear his name of corruption accusations. And then things go from bad to worse for Calladine . . . With the team under massive pressure and drugs flooding the streets, another gruesomely presented body is found. In an ending with a huge twist, the detectives must unpick decades’ old lies before anyone else dies. If you like Angela Marsons, Rachel Abbott, Mel Sherratt, Ruth Rendell, or Mark Billingham you will enjoy this exciting new crime fiction writer. DEAD BAD is book eight of a new series of detective thrillers featuring D.S. Ruth Bayliss and D.I. Tom Calladine. THE DETECTIVESTom Calladine is a detective inspector who is devoted to his job. His personal life, however, is not so successful. Having been married and divorced before the age of twenty-one has set a pattern that he finds difficult to escape. Ruth Bayliss is in her mid-thirties, plain-speaking but loyal. She is balancing her professional life with looking after a small child.THE SETTING The fictional village of Leesdon on the outskirts of an industrial northern English city. There is little work and a lot of crime. The bane of Calladine’s life is the Hobfield housing estate, breeding ground to all that is wrong with the area that he calls home. DISCOVER YOUR NEXT FAVOURITE MYSTERY SERIES NOWTHE CALLADINE & BAYLISS MYSTERY SERIESBook 1: DEAD WRONGBook 2: DEAD SILENTBook 3: DEAD LISTBook 4: DEAD LOSTBook 5: DEAD & BURIEDBook 6: DEAD NASTYBook 7: DEAD JEALOUSBOOK 8: DEAD BAD THE DCI GRECO BOOKSBook 1: DARK MURDERBook 2: DARK HOUSESBook 3: DARK TRADEBook 4: DARK ANGEL MATT BRINDLEHIS THIRD VICTIM
Posted by NOT SO NOBLE BOOKS at 03:22 No comments: