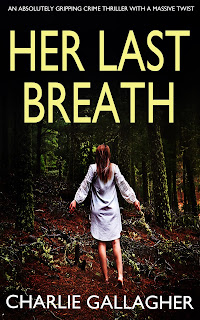 Discover a crime thriller which will have you gripped from the explosive start to one of the most shocking endings of the year.
DETECTIVE GEORGE ELMS THOUGHT HE’D SEEN IT ALL, UNTIL HE COMES UP AGAINST SERIAL KILLER HENRY ‘THE BULL’ ROBERTS.
Henry Roberts had a type — young, blonde, attractive women. He is three years into a life sentence.
Two of his victims were never found.
Now, Henry Roberts is dying and he wants to make a deal. Move him to a secure unit by the sea and he will tell the police where the other victims’ remains are.
The offer is accepted and Detective George Elms travels to the force who led the original investigation. He is the messenger. He finds a police force and a community still shattered. As he reviews the old case notes he also learns something else. Henry Roberts didn’t work alone.
A woman goes missing who fits the profile of the other victims. The circumstances of her disappearance do too — she never made it from her commuter train to her car.
Then a second woman disappears. George is convinced the cases are linked. Henry Roberts told him on his prison visit that two is better because, “you can make the other one watch.”
Time is running out for George. He’s convinced that Henry Roberts knows who he should be chasing, but will he help before he takes his last breath? Or the women take theirs?
Perfect for fans of Kimberley Chambers, Damien Boyd, Rachel Abbott, Patricia Gibney or Mark Billingham.
What readers are saying about HER LAST BREATH
"This book will keep you on the edge of your seat. I hated having to put it down." Barbara
“Really liked this book. Great story. Characters you can sink your teeth into.” Sue
“A really good novel. Be prepared to be shocked and horrified at what one person will do to others.” Aileen
THE AUTHOR
Charlie Gallagher has been a serving UK police officer for ten years. During that time he has had many roles, starting as a front-line response officer, then a member of a specialist tactical team and is currently a detective investigating serious offences.
ALSO BY CHARLIE GALLAGHER
LANGTHORNE POLICE SERIES
Book 1: BODILY HARM
Book 2: PANIC BUTTON
Book 3: BLOOD MONEY
Book 4: END GAME
MISSING
THEN SHE RAN
RUTHLESS
Posted by NOT SO NOBLE BOOKS at 02:31 No comments:

https://www.amazon.co.uk/MURDER-MISSES-gripping-mystery-twists-ebook/dp/B07FF2NFNZ UK £1.99https://www.amazon.com/murder-misses-gripping-mystery-twists-ebook/dp/B07FF2NFNZ USA $2.99https://www.amazon.com.au/murder-misses-gripping-mystery-twists-ebook/dp/B07FF2NFNZ AUS $3.99https://www.amazon.ca/murder-misses-gripping-mystery-twists-ebook/dp/B07FF2NFNZ CAN $2.99MURDER NEVER MISSES by Faith MartinLooking for a brilliant best-selling murder mystery with a feisty female detective? DETECTIVE HILLARY GREENE IS SOLVING THE COLD CASES NO ONE ELSE COULD CRACK. PLEASE NOTE THIS IS A REVISED EDITION OF A BOOK FIRST PUBLISHED AS “WALK A NARROW MILE.” Three missing young women. One evil stalker. But Hillary doesn’t think it all adds up. Hillary is recovering from the vicious attack by her stalker. It appears that he is also behind the disappearance and murder of three women. Her bosses want these unsolved cases closed, but Hillary has a theory that will shock everyone. However, as the truth comes to light, Hillary and the team are faced with a dire emergency — can they prevent an imminent murder? Hillary Greene has returned to Thames Valley Police HQ, acting as a cold-case consultant for the Crime Review Team, looking into murders which the police have never been able to solve. She wasn’t sure she wanted to go back. But solving crimes is irresistible for Hillary Greene. And it doesn’t hurt that her new boss is devastatingly handsome. This is a crime mystery full of well-observed characters, which will have you gripped from start to the absolutely thrilling conclusion.What readers are saying about MURDER NEVER MISSES“A stunning read.” Olga“For me this is the most exciting book to date in the D.I Hillary Greene series.” Maggie“A very good read.” Viv“A gripping mystery which will keep you guessing!” Barbara“Another fantastic read.” Nerys MURDER NEVER MISSES is the fourteenth in a series of page-turning crime thrillers set in Oxfordshire. THE DETECTIVEDI Hillary GreeneAn attractive, single woman nearing the landmark age of fifty, Hillary Greene was a police officer of many years’ experience (earning the rank of DI) and came up through the ranks. Consequently, she knew how the system worked, and was always fiercely loyal to the force without being blinkered to its faults. Forced to retire early through no fault of her own, she has now returned to the force as a civilian consultant on cold cases. She still enjoys a rather enigmatic relationship with the wily Commander Marcus Donleavy, but it is her new boss, the very attractive Steven Crayle, who is likely to cause her the most problems now! PLEASE NOTE THIS IS A REVISED EDITION OF A BOOK FIRST PUBLISHED AS “WALK A NARROW MILE.” DI HILLARY GREENE SERIESBOOK 1: MURDER ON THE OXFORD CANALBOOK 2: MURDER AT THE UNIVERSITYBOOK 3: MURDER OF THE BRIDEBOOK 4: MURDER IN THE VILLAGEBOOK 5: MURDER IN THE FAMILYBOOK 6: MURDER AT HOMEBOOK 7: MURDER IN THE MEADOWBOOK 8: MURDER IN THE MANSIONBOOK 9: MURDER IN THE GARDENBOOK 10: MURDER BY FIREBOOK 11: MURDER AT WORKBOOK 12: MURDER NEVER RETIRESBOOK 13: MURDER OF A LOVERBOOK 14: MURDER NEVER MISSES Books 15-17 coming soon!Join the Joffe Books mailing list to be the first to hear about newreleases.
Posted by NOT SO NOBLE BOOKS at 02:49 No comments: 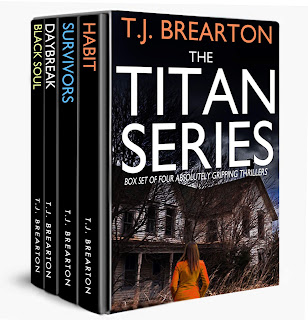 DO YOU LOVE GRIPPING CRIME THRILLERS? THEN DISCOVER ONE OF THE MOST EXCITING SERIES OF THE DECADE.YOU GET FOUR HEART-POUNDING THRILLERS IN THIS AMAZING BOX SET.For the first time ever, the four best-selling books in The Titan Series are available in one edition.JENNIFER AIKEN AND BRENDAN HEALY. TWO INVESTIGATORS FIGHTING A DANGEROUS WORLD OF CRIME AND CORRUPTION.BOOK 1: HABITA MURDER MYSTERY WITH MUCH MORE BEHIND IT. Rebecca Heilshorn, lies stabbed to death in her bed in a remote, upstate New York farmhouse. Rookie detective Brendan Healy is called in to investigate. All hell breaks loose when her brother bursts onto the scene. Rebecca turns out to have many secrets and connections to a sordid network mixing power, wealth, and sex.Detective Brendan Healy, trying to put his demons behind him, pursues a dangerous investigation that will risk both his life and his sanity.BOOK 2: SURVIVORSKIDNAP, CORRUPTION AND VERY DARK CONSPIRACIES. The phone rings. One of Brendan Healy’s oldest and best friends is dead. Healy must return home to Hawthorne to found out why. Meanwhile, Agent Jennifer Aiken is investigating the same dark conspiracy involving politicians, prostitution, and black markets. The trail will put both her and Brendan’s life in mortal danger, as well as introducing Healy to the fascinating young woman Sloane Dewan, who may hold the key to it all.BOOK 3: DAYBREAKFULL OF MASSIVE TWISTS AND TURNS. Brendan and Jennifer work together to expose the corruption at the heart of the American government and the people attempting to control the economy, military, and police for their own ends. Can Brendan finally get justice for his wife and daughter and all the other victims of the dark forces subverting freedom?BOOK 4: BLACK SOULINTERNATIONAL CRIME IN PARADISE. Free-spirited Rene Sterling vanished ten days ago. Her father fears she’s been sold into sex slavery. Investigators William Chase and Hanna Beckett are his last hope to find her. Find out what Brendan and Jennifer did next in this brilliantly gripping thriller.If you like Stieg Larsson, Jo Nesbo, or Dennis Lehane novels you will be gripped by the compelling crime thriller trilogyALL BOOKS WERE PREVIOUSLY PUBLISHED SEPARATELY AS HABIT, SURVIVORS, DAYBREAK (PUBLISHED AS A BOX SET “A WOMAN FOUND DEAD IN A FARMHOUSE”), AND BLACK SOULWHAT READERS ARE SAYING ABOUT THE BOOKS"The single best crime investigation fiction I've ever read. It's well written, believable characters, and the best part is, it's long enough that I have a chance to enjoy it for days." R. Glueck“Detective Brendan Healy solves a complex case, facing his own demons, in a brilliant police procedural with a dark conspiracy in the background.” Sarah Victor“Couldn't put it down. No work done until I'd finished it.” Sue“Filled with twists and turns which you definitely don't see coming, the suspense grows as the book progresses, until the point comes where you want to shake some sense into Brendan.” Aurora“I was totally hooked from the very first paragraph.” Peachieday“This is an intense, emotional, gripping thriller that kept me reading until it was over.” KC“Keeps you on the edge right till the end, one of those books you don't want to put down, would highly recommend it.” Lynda“Excellent series that you must read from book 1 or you will miss out on so much.” LisaALSO BY T.J. BREARTONNORTH COUNTRY: DARK WEB, DARK KILLS, GONETOM LANGE: DEAD GONE, TRUTH OR DEAD
Posted by NOT SO NOBLE BOOKS at 04:40 No comments: