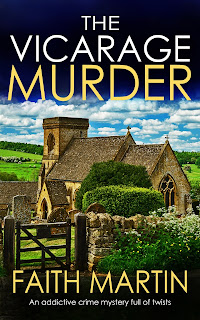 Very excited to introduce Faith's new detective, Monica Noble, vicar's wife and crime solver!THE VICARAGE MURDER by Faith Martinhttps://www.amazon.co.uk/VICARAGE-MURDER-addictive-mystery-Detective-ebook/dp/B07WP55T14 UK only £1.99 for launchhttps://www.amazon.com/VICARAGE-MURDER-addictive-mystery-Detective-ebook/dp/B07WP55T14 USA only $2.99https://www.amazon.com.au/VICARAGE-MURDER-addictive-mystery-Detective-ebook/dp/B07WP55T14/  AUSTRALIA $3.99https://www.amazon.ca/VICARAGE-MURDER-addictive-mystery-Detective-ebook/dp/B07WP55T14/  CANADA $2.99Discover a new series of murder mysteries set in an idyllic English village. From million-selling author Faith Martin. Meet Monica Noble: the vicar’s wife with a taste for solving crimes. Please note this book was first published as “AN UNHOLY MESS” under Faith Martin’s pen name JOYCE CATO. IN A QUIET COTSWOLD VILLAGE ALL HELL IS ABOUT TO BREAK LOOSEMonica Noble is throwing a party to welcome the village’s new residents. The guests include Margaret and her cheating husband Sean, who’s a celebrity chef. Also on the list are an Oxford university professor, a 40-something divorcee, and the owner of a chain of gyms. Then as the drinks are flowing, a shotgun blast rings out. One of the guests is found dead. DCI Dury and Sergeant Jim Greer are soon on the scene and discover that the victim had many enemies. Almost all the guests harbour secrets and motives for murder. Even Monica’s daughter comes under suspicion. When another villager is strangled to death nearly a week later, the stakes are raised. Can Monica help the local detectives save her daughter and solve the murders before anyone else pays the ultimate price? This is the first of a series of enjoyable murder mysteries with great characters and baffling crimes which will keep you gripped till the final page. Perfect for fans of classic whodunits by authors like Agatha Christie, LJ Ross, TE Kinsey, and J.R. Ellis. MONICA NOBLE was widowed young, leaving her to raise her feisty daughter on her own. That is, until she met and fell in love with Graham Noble, a country vicar (pastor), who enticed her to leave her high-flying job in advertising in the city and move to the Cotswold countryside. There she found bucolic life very pleasant indeed — until murder started to rear its ugly head. And she discovered, to everyone's surprise, that she had a flair for solving the most unholy of crimes. FAITH MARTIN is the best-selling author of the DETECTIVE HILLARY GREENE and JENNY STARLING mysteries, which have topped the global best-seller charts. More MONICA NOBLE mysteries coming soon. Join the Joffe Books mailing list to be the first to hear about the next in the series. JENNY STARLING MYSTERIESBook 1: THE BIRTHDAY MYSTERYBook 2: THE WINTER MYSTERYBook 3: THE RIVERBOAT MYSTERYBook 4: THE CASTLE MYSTERYBook 5: THE OXFORD MYSTERYBook 6: THE TEATIME MYSTERYBook 7: THE COUNTRY INN MYSTERY
Posted by NOT SO NOBLE BOOKS at 01:55 No comments:

Out now on Kindle, a new police thriller by Denver Murphy. 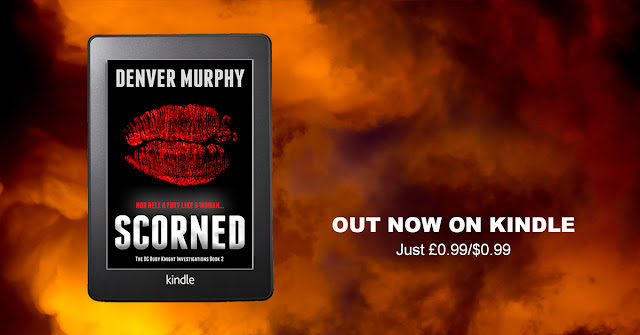 
Inexperienced detective Ruby Knight is thrown a curve ball when a spate of burglaries results in a homicide.

Commuters to the sleepy suburban town of St. Albans become alarmed when a series of aggravated burglaries begins.

DC Knight and her new partner, experienced but cynical DI Cooper, are in charge of tracking the gang responsible. But the pressure mounts as the attacks become increasingly violent.

They pull out all the stops to catch them, but in the meantime another type of criminal sees an opportunity.

Will DC Knight be able to separate the wheat from the chaff and see the facts for what they are, or will pressure from on high to solve the case let a dangerous individual off the hook?

SCORNED is the second book in the DC Ruby Knight investigations series. It is written by Denver Murphy, author of the best-selling DCI Brandt serial killer trilogy.
Posted by NOT SO NOBLE BOOKS at 03:28 No comments: 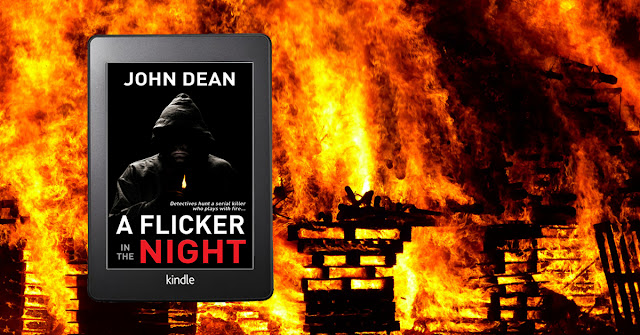 It was a defining moment in DCI John Blizzard’s early career when he caught a notorious arsonist on a killing spree.

Yet despite the culprit, Reginald Morris, being safely behind bars in a high-security mental hospital, a new series of attacks occurs.

Blizzard is flummoxed. Has Morris found someone to do his bidding on the outside? Is this a personal vendetta? A copycat?

The only clue to the killer’s identity is obscure poetry that is being sent to Hafton police station. But is it just the work of a deranged mind who enjoys taunting the police, or someone hell-bent on revenge?

Will Blizzard piece together the puzzle before there is another flicker in the night?

A FLICKER IN THE NIGHT is the seventh murder mystery by John Dean to feature hard-hitting crime solver John Blizzard. The full list of previous books is as follows:

1.THE LONG DEAD
2.STRANGE LITTLE GIRL
3.THE RAILWAY MAN
4.THE SECRETS MAN
5.A BREACH OF TRUST
6.DEATH LIST
Posted by NOT SO NOBLE BOOKS at 04:39 No comments: 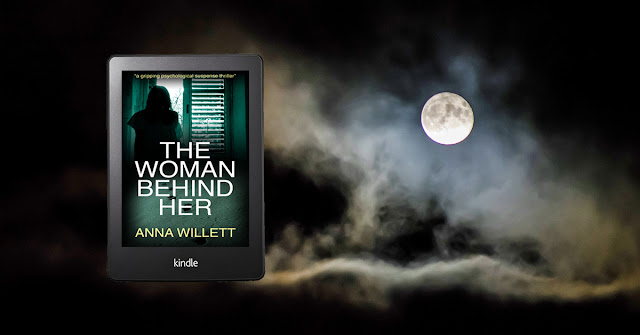 
A woman alone. Watched. But by whom, and why?

When schoolteacher Jackie Winter inherits her beloved aunt’s house, she discovers that her close relative had been keeping a terrible secret.

As Jackie is drawn into her aunt’s past, all that was certain begins to fray. But she is destined to not experience this alone. Someone is watching her every move.

Then there is a murder near the house. A cruel killing. Suddenly Jackie finds herself in the frame.
Trying to keep one step ahead of the police, Jackie turns her attention once more to the past, now certain there’s a link between her aunt’s secrets and the shadowy figure that plagues not only her days but also her nightmares.

THE WOMAN BEHIND HER is a spellbinding psychological thriller that will keep you up all night.
Anna Willett is the author of several thrillers. She explores how strong women react to difficult situations. If you are looking for a page-turner full of suspense, look no further.
Posted by NOT SO NOBLE BOOKS at 04:37 No comments:

New box set of a gripping series of Mysteries 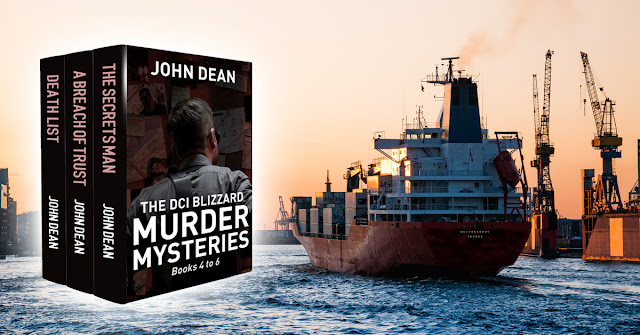 FANTASTIC OFFER OUT NOW ON KINDLE

Books 4 to 6 of the DCI John Blizzard murder mysteries. Just 99p/99c for a very short time. Don't miss out!

Whilst detective John Blizzard looks into a series of drug-related deaths, his nemesis, gangland thug Morrie Raynor, is released from prison. Blizzard becomes convinced Raynor is linked to a new crime spree, but with little evidence other than the ravings of a sick, delirious man, the detective's colleagues suspect his personal feelings are clouding his judgement.

A BREACH OF TRUST

A corrupt industrialist is found dead. When his family shed crocodile tears, DCI John Blizzard turns the screw. But when their alibis check out, can his team track down the real killer among a long list of likely suspects?

An undercover detective is shot in his home. Later, police officers on a routine patrol are fired at. Someone has a big problem with law enforcement. DCI Blizzard starts a crackdown on his city’s most notorious gangsters. But is he in danger of rubbing the wrong people up the wrong way? Or is he already on the killer’s list?

All three of these books are also available separately on Kindle and in paperback.

This box set is available FREE with Kindle Unlimited.

The first three books in the series, THE LONG DEAD, STRANGE LITTLE GIRL and THE RAILWAY MAN, are also available individually on Kindle and in paperback and as a box set on Kindle.

If you enjoy mysteries that have you guessing until they end, you’ll love these books about hard-hitting detective John Blizzard and his team.
Posted by NOT SO NOBLE BOOKS at 04:08 No comments:

NEW RELEASE: DEATH ON THE LEVELS by David Hodges 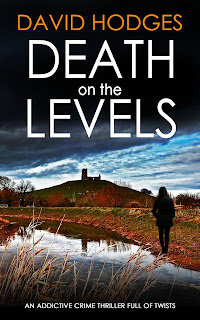 Delighted to present David Hodges' latest addictive mystery set on the atmospheric Somerset Levels.DEATH ON THE LEVELS only 99p for launchhttps://www.amazon.co.uk/addictive-thriller-Detective-Hamblin-mystery-ebook/dp/B07VPQBMPS UKhttps://www.amazon.com/addictive-thriller-Detective-Hamblin-mystery-ebook/dp/B07VPQBMPS/USAhttps://www.amazon.com.au/addictive-thriller-Detective-Hamblin-mystery-ebook/dp/B07VPQBMPS/ AUShttps://www.amazon.ca/addictive-thriller-Detective-Hamblin-mystery-ebook/dp/B07VPQBMPS/ CANMEET DETECTIVE KATE HAMBLIN IN THIS PAGE-TURNING NEW SERIES FROM A FORMER POLICE OFFICER.A PSYCHOTIC SERIAL KILLER TARGETING OLDER WOMEN: THE AUNTIE KILLER.An eccentric letter arrives at the police station from a man threatening to kill his aunts. Detective Kate and her colleagues don’t take it seriously.But an elderly woman is found strangled in her home. “RIP Auntie” is written on the floor in red lipstick.Then another older woman is murdered.With a major police manhunt underway, it becomes clear that they are up against a very dangerous serial killer, who is engaged in some kind of personal vendetta. An adversary who will not stop until he has achieved what he set out to do. But as she tries to get into the mind of the perpetrator, she finds he’s something of a chameleon and always seems to be one step ahead of the police — and this is not the only problem she has to deal with. She finds herself at odds with her boss over what she perceives as a crucial link between their man and a now derelict orphanage.And another victim will die if Kate can’t track down the killer. Whose aunt will pay the ultimate price next?DISCOVER A BREATH-TAKING NEW SERIES OF MYSTERIES THAT YOU WON’T WANT TO PUT DOWNPerfect for fans of Rachel Abbott, Robert Bryndza, Mel Sherratt, Angela Marsons, Colin Dexter, or Ruth Rendell.THE DETECTIVESKate is a feisty, young police detective, with a dynamic approach to her job. She is plucky and tenacious, but prone to being impetuous and headstrong, which often lands her in tight spots and does not exactly endear her to her crusty boss, DI Ted Roscoe.In stark contrast to Kate, her detective partner, Hayden, is an overweight, untidy ex-public schoolboy, with a pompous, laid-back attitude, which drives her to distraction. But he is also highly intelligent, with a keen, analytical mind and a practical, reasoned approach to everything, which, with a prevailing wind, can sometimes act as a brake on his partner’s more impulsive actions. THE SETTINGA patchwork of fields, peat moor and marshland, dotted with picturesque villages and criss-crossed by man-made irrigation ditches or rhynes, the Somerset Levels covers an area of about 160,000 acres between the Mendips and Quantock Hills, in the County of Somerset. Sparsely populated outside the local towns of Bridgwater, Glastonbury and Street and prone to flooding, it is a haven for wild life, a wild, secret place with an atmospheric brooding stillness, which creeps into the very soul; a place where the booming call of a bittern or the beating of an owl’s wings in the mist is bound to fire the imagination of any self-respecting crime novelist, whose thoughts will invariably turn to… murder.THE AUTHORA former police superintendent, with thirty years’ service. Since ‘turning to crime’, he has received critical media acclaim, including a welcome accolade from Inspector Morse’s creator, the late great, Colin Dexter, and he is now a prolific novelist with eleven published crime novels and an autobiography on his police career to his credit. His previous police experience has enabled him to provide a gritty realism to his thrillers and his Somerset Murder Series, featuring feisty female detective, Kate, and her partner, Hayden, has gone from strength to strength, attracting interest in the United States as well as in the UK. DETECTIVE KATE HAMBLIN MYSTERY SERIESBook 1: MURDER ON THE LEVELSBook 2: REVENGE ON THE LEVELSBook 3: FEAR ON THE LEVELSBook 4: KILLER ON THE LEVELSBook 5: SECRETS ON THE LEVELSBook 6: DEATH ON THE LEVELS
Posted by NOT SO NOBLE BOOKS at 03:53 No comments: