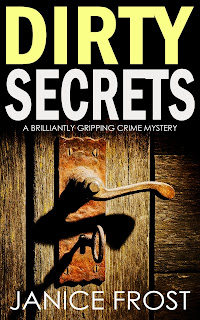 www.amazon.co.uk/DIRTY-SECRETS-brilliantly-gripping-mystery-ebook/dp/B07F1SNYZ4/ UK 99phttps://www.amazon.com/dp/B07F1SNYZ4 USA $0.99https://www.amazon.com.au/DIRTY-SECRETS-brilliantly-gripping-mystery-ebook/dp/B07F1SNYZ4/ AUS $0.99https://www.amazon.ca/DIRTY-SECRETS-brilliantly-gripping-mystery-ebook/dp/B07F1SNYZ4/ CAN $0.99What readers are saying about DIRTY SECRETS“A very good storyline with so much happening in the family to keep the reader engrossed.” Viv“Really enjoyable read.” Nerys“Good entertaining read, with heart in the mouth moments.” Carole“A fast-paced mystery with plenty of suspects.” Barbara“I just had to keep reading to see what was going to happen next.” DawnBest wishesRudiDIRTY SECRETS by Janice FrostLooking for a gripping crime thriller which you won’t want to put down?DISCOVER THE NEW MYSTERY FROM BEST-SELLING AUTHOR JANICE FROSTBusinessman Russell Marsh is found shot dead in his home. Russell’s ‘angel investment’ company had made him many enemies. His business was struggling and his family and friends  were not all on his side. But did any of them really want him dead?DI Jim Neal and DS Ava Merry are called in to investigate a very complex murder.Then another body is found in the woods and the case gets much murkier.There are some very dirty secrets hidden behind the seemingly happy lives of the families involved.And the trail will lead them into a dangerous world of crime.Great for fans of Angela Marsons, Rachel Abbott, Ruth Rendell, or Mark Billingham. THE DETECTIVESDS Ava Merry is a young policewoman, recently promoted to detective sergeant. She is fitness fanatic with a taste for dangerous relationships. DI Jim Neal is single dad who juggles his devotion to his job with caring for his son. DS MERRY & DI NEAL SERIESBook 1: DEAD SECRETBook 2: DARK SECRETBook 3: HER HUSBAND’S SECRETBook 4: THEIR FATAL SECRETSBook 5: DIRTY SECRETS
Posted by NOT SO NOBLE BOOKS at 02:38 No comments: 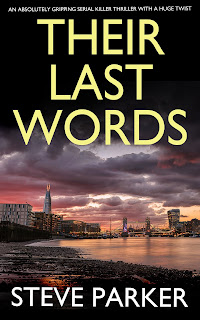 https://www.amazon.co.uk/absolutely-gripping-serial-killer-thriller-ebook/dp/B07DVKVVGF/ UKhttps://www.amazon.com/absolutely-gripping-serial-killer-thriller-ebook/dp/B07DVKVVGF USAhttps://www.amazon.com.au/absolutely-gripping-serial-killer-thriller-ebook/dp/B07DVKVVGF/ AUShttps://www.amazon.ca/absolutely-gripping-serial-killer-thriller-ebook/dp/B07DVKVVGF/ CANADATHEIR LAST WORDS by Steve ParkerDiscover a crime thriller full of shocking twists by one of the most exciting new authors you’ll read this year. A VICTIM. A MUTILATED BODY. A SINGLE WORD.A young woman is found dead on the streets of London. Her throat slashed, her body mutilated, and one word carved into her flesh: “DON’T.” Detective Superintendent Ray Paterson is assigned to the case. Young, handsome, and from a well-off background, he’s tipped for the top. He joins a team based out of Bermondsey, South London. It’s meant to be a stepping stone to his next promotion, but this case will threaten to bring down his career and everything he thought he knew about policing. Paterson is put in charge of the dead girl's investigation and quickly discovers he must rely on his friend and mentor, Detective Sergeant Dave Jordan to guide him through. THEN ANOTHER BODY IS DISCOVERED. ANOTHER WORD CUT INTO THE VICTIM’S CHEST.The police realise they may have a depraved serial killer on their hands. The murderer is trying to send them a message carved in his victims’ bodies. But who’s the message for? How many more must die? Detective Paterson may be the only man who can stop this vile killer . . . if he can survive long enough. This is the first in a series of action-packed, edge-of-your-seat crime thrillers, with an ending that will have your heart in your mouth. Perfect for fans of  Kimberley Chambers, Damien Boyd, Rachel Abbott, Patricia Gibney or Mark Billingham. PLEASE NOTE THIS IS A HEAVILY REVISED EDITION OF A BOOK FIRST PUBLISHED AS “THE SKY IS CRYING.”TWO DETECTIVES WHO HATE EVERYTHING ABOUT EACH OTHER MUST WORK TOGETHERDetective Superintendent Ray Paterson, is a young and (thanks to family money) wealthy womaniser, separated from his model wife and tipped to be the youngest ever commissioner of police. He knows he’s weak when it comes to practical policing and struggles to find a place among his peers, desperate to be a good policeman and not just a 'climber'. Detective Sergeant Johnny Clocks is a foul-mouthed, working-class officer. He grew up surrounded by rogues and villains to become a first-class thief taker with the Met police. However, his childish attitude has short-circuited his career and he spends his days antagonising as many people as he can. Detective Sergeant Dave Jordan is an old-school copper who trusts his instincts but relies on evidence. He is typical in that his marriage has broken down and he's been unable to form a relationship since. THE AUTHORSteve Parker is a retired police officer who served for 20 years in numerous high-profiles squads. THE SETTINGBermondsey is an area of London nestled on the banks of the River Thames. It once had a reputation for housing more armed robbers, murderers and career criminals than anywhere else in the country. Now one of the most upmarket places to live and work in London, it has all but severed itself from its working-class roots. Home to the iconic Tower Bridge and crammed with expensive apartments, art galleries, fancy restaurants and famous residents. But for the police, those who truly know, Bermondsey never lost its roots . . . or its reputation.
Posted by NOT SO NOBLE BOOKS at 03:23 No comments:

NEW RELEASE: MURDER OF A LOVER by Faith Martin 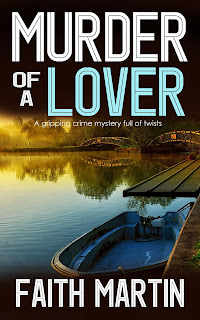 Looking for a brilliant best-selling murder mystery with a feisty female detective?

DETECTIVE HILLARY GREENE IS SOLVING THE COLD CASES NO ONE ELSE COULD CRACK.

PLEASE NOTE THIS IS A REVISED EDITION OF A BOOK FIRST PUBLISHED AS “A NARROW MARGIN OF ERROR.”

Ten years ago, Rowan Thompson was found stabbed to death with a pair of scissors in his student house. It turns out that Rowan was quite a lover, with many disgruntled partners left in his wake.

But did any of them have a strong enough motive to murder him?

Meanwhile. Hillary’s stalker is getting more aggressive with his messages and flowers. And it looks like he may be much, much worse than she thought.

Has Hillary finally bitten off more than she can chew?

Hillary Greene has returned to Thames Valley Police HQ, acting as a cold-case consultant for the Crime Review Team, looking into murders which the police have never been able to solve.

She wasn’t sure she wanted to go back. But solving crimes is irresistible for Hillary Greene. And it doesn’t hurt that her new boss is devastatingly handsome.

This is a crime mystery full of well-observed characters, which will have you gripped from start to the absolutely thrilling conclusion.

MURDER OF A LOVER is the thirteenth a series of page-turning crime thrillers set in Oxfordshire.

What readers are saying about MURDER OF A LOVER
“It is full of twists and turns and keeps the reader on the edge of their proverbial seats.” Joyce

“What a page turner this turned out to be.” Greta

“Another brilliant book by Faith Martin which kept me guessing until the end.” Barbara

“This book grabbed me from the first page, captivated me and left me truly wanting more.” Claudia

THE LOCATION
Number 8 Kebler Road is a three-story house in a typical leafy road in Oxford, near South Park. Victorian terraces face each other across the narrow street, whose pavements are interspersed with strategically placed lime trees. Keble College, an unmistakable building of red and white brick is the dominant feature. Quiet, pleasant, it’s in one of the city’s many attractive areas, and dedicated mainly to student digs and private residential properties.

THE DETECTIVE
DI Hillary Greene
An attractive, single woman nearing the landmark age of fifty, Hillary Greene was a police officer of many years’ experience (earning the rank of DI) and came up through the ranks. Consequently, she knew how the system worked, and was always fiercely loyal to the force without being blinkered to its faults. Forced to retire early through no fault of her own, she has now returned to the force as a civilian consultant on cold cases. She still enjoys a rather enigmatic relationship with the wily Commander Marcus Donleavy, but it is her new boss, the very attractive Steven Crayle, who is likely to cause her the most problems now!

PLEASE NOTE THIS IS A REVISED EDITION OF A BOOK FIRST PUBLISHED AS “A NARROW MARGIN OF ERROR.”

Books 14-17 coming soon!
Join the Joffe Books mailing list to be the first to hear about new
releases.
Posted by NOT SO NOBLE BOOKS at 05:48 No comments: