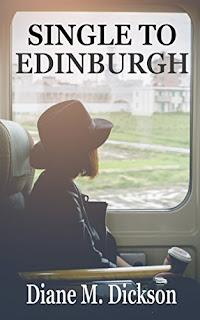 
If you like romance and suspense, look no further than this touching story of rekindled love

After losing her baby, Katherine has struggled with life, and her increasingly estranged husband. She decides to take off to Edinburgh, where she meets a man who showers her with kindness. Despite his tenderness, however, Katherine resolves to rescue her marriage. But when this is met by her partner Bill’s indifference...

Stephanie, Katherine’s sister-in-law is forthright and bossy. Will she be a help or a hindrance to Katherine, when news about Bill’s extra martial affairs becomes too obvious to hide? Will the bond between women prove stronger than family ties?

SINGLE TO EDINBURGH is a feel-good romance set in England and Scotland. It tells of the heartbreak of losing a loved one, and the slow process of becoming strong again. It tells the story of how a kiss can reignite a person, no matter how low they feel; how hope wins out against despair, and how joy is to be grasped.

This book contains no graphic sex or violence and only mild swearing. It is a great read for the whole family to enjoy.

SINGLE TO EDINBURGH is the first romance novel by Diane Dickson. Look out for her other women’s fiction titles which include: LEAVING GEORGE, WHO FOLLOWS and TWIST OF TRUTH.
Posted by NOT SO NOBLE BOOKS at 04:36 No comments:

https://www.amazon.co.uk/MURDERERS-gripping-crime-thriller-twists-ebook/dp/B01LWY0PUJ/
https://www.amazon.com/MURDERERS-gripping-crime-thriller-twists-ebook/dp/B01LWY0PUJ/
"What if your mother was a serial killer?" A BLOODY KILLER SEEMS TO HAVE RETURNED TO THE LINCOLNSHIRE FENS A gripping standalone crime thriller by the best-selling author of the Nikki Galena series. Twenty years ago: a farmer and his wife are cut to pieces by a ruthless serial killer. Now: a woman is viciously stabbed to death in the upmarket kitchen of her beautiful house on the edge of the marshes. Then a man called Daniel Kinder walks into Saltern police station andconfesses to the murder. But DI Rowan Jackman and DS Marie Evans of the Fenland Constabulary soon discover that there is a lot more to Daniel than meets the eye. He has no memory of the first five years of his life and is obsessed with who his real mother is. With no evidence to hold him, Jackman and Evans are forced to let him go, and in a matter of daysthe lonely Lincolnshire Fens become the stage for more killings and Daniel has disappeared. In a breathtaking finale, the truth about Daniel’s mother comes to light and DI Jackman and DS Evans race against time to stop more lives being destroyed. The detectives: DS Marie Evans lost her husband in a motorbike accident and has personal connections to the case. DI Rowan Jackman leads the investigation. He is extremely smart and has a knack for bringing out the best in his diverse team, which includes the mysterious computer specialist Orac. Full of twists and turns, this is a crime thriller that will keep you turning the pages until the shocking ending. THIS BOOK IS NOT PART OF THE NIKKI GALENA SERIES BUT TAKES PLACE IN THE SAME STUNNING AREA Perfect for fans of Rachel Abbott, Robert Bryndza, Mel Sherratt, Angela Marsons, Colin Dexter, or Ruth Rendell. ALSO BY JOY ELLIS THE NIKKI GALENA SERIES Book 1: CRIME ON THE FENS Book 2: SHADOW OVER THE FENS Book 3: HUNTED ON THE FENS Book 4: KILLER ON THE FENS
Posted by NOT SO NOBLE BOOKS at 07:29 No comments: 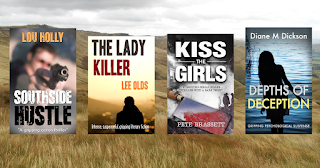 Don't miss out on these bestselling thrillers and mysteries on special offer.


If you like your books packed with action and suspense, look no further than this thriller set in the drugs world of 1980s Chicago.
Can hero Patrick escape a life of crime and do right by his son?

THE LADY KILLER by Lee Olds
A bet between friends has disastrous consequences when one of them seduces a rich, beautiful but disturbed society lady. This is a book that cuts deep into the human character, with a thunderous finale.

KISS THE GIRLS by Pete Brassett
Pete's latest book AVARICE has been topping the Kindle charts; here is an opportunity to get his Post-war London based thriller with a jaw-dropping ending, at a rock bottom price.

DEPTHS OF DECEPTION by Diane Dickson
A weak and ineffectual real estate broker thinks his luck is on the up when he meets Libby, a young woman with the keys to a huge mansion. Just what is he letting himself in for?

All of these titles are FREE on Kindle Unlimited.
Posted by NOT SO NOBLE BOOKS at 08:05 No comments:

NEW RELEASE: The Girl who Stole the Apple by Peter Tickler

NEW RELEASE! only 99p for a limited time 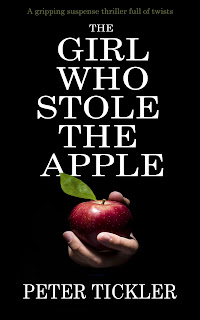 A page-turning suspense thriller full of twists and turns by best-selling author Peter Tickler
Who can you trust? Who are the good guys and who wants you dead? What's so valuable that people will kill to get hold of it?
A little girl dressed in a Snow White costume walks into a shop and steals an apple . . . then the shop blows up. One of the staff, Maggie Rogers, is conveniently out of the shop when all this happens. Maggie turns out to have a past full of secrets and betrayal, and attracts the attention of the police as well as more sinister forces. Maggie and the little girl end up on the run, not knowing who’s on their side or even what their pursuers really want.
Then they seem to have reached the end of the line. Nowhere else to run, nowhere else to hide. Maggie and the little girl face a desperate struggle for survival.
Find out the answers in this beautifully written novel which will take you on a darkly gripping journey to a surprising end.

Great for fans of Gillian Flynn, Ian McEwan or Paula Hawkins who love fast-paced suspense thrillers
Posted by NOT SO NOBLE BOOKS at 03:29 No comments: