NEW RELEASE: the latest Nikki Galena book from the best-selling Fens series, only $0.99/ £0.99 for a limited time only! 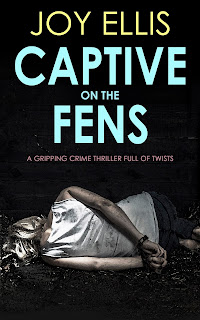 CAPTIVE ON THE FENS

A YOUNG WOMAN’S BODY IS FOUND IN A REMOTE BARN ON THE FENS. BEFORE SHE WAS KILLED, ONE OF HER FINGERS HAD BEEN CUT OFF. WHO IS INFLICTING THIS VIOLENCE AND WHY?

Can DI Nikki Galena stop them before anyone else suffers?

Full of twists and turns, this is a crime thriller that will keep you turning the pages until the heart-stopping ending.

The young woman in the barn had been kept captive for some time. And the case shows strong similarities to an unsolved murder in Derbyshire. When another woman is found alive with similar injuries the case grows even more complicated.

At the same time, the Fenland police have received intelligence that the ruthless criminal Freddy Carver plans to make Greenborough the hub for his new enterprise. DI Nikki Galena is desperate to track down Freddie Carver and make sure that he does not put down roots in the Fens, but finding him is not easy. And what’s his connection to the kidnapped girls?

And who is the woman being held captive in a remote location? DI Nikki Galena must rally her team of detectives, while facing a traitor on the inside, as Nikki races against time to save more than one victim, including someone she care deeply about.

THE DETECTIVE
DI Nikki Galena: A police detective with nothing left to lose, she’s seen a girl die in her arms and her own family destroyed. She’s tough on the criminals who she thinks did this to her.

HER PARTNER
DS Joseph Easter is the squeaky-clean new member of the team. But his nickname “Holy Joe” belies his former life as a soldier. He has an estranged daughter who blames him for everything that went wrong with their family.

THE SETTING The Lincolnshire Fens: great open skies brood over marshes, farmland, and nature reserves. It is not easy terrain for the Fenland Constabulary to police, due to the distances between some of the remote Fen villages, the dangerous and often misty lanes, and the poor telephone coverage. There are still villages where the oldest residents have never set foot outside their own farmland and a visit to the nearest town is a major event. But it has a strange airy beauty to it, and above it all are the biggest skies you’ve ever seen. 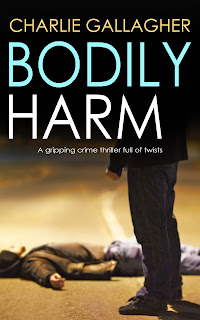 FULL OF TWISTS AND TURNS, THIS CRIME THRILLER WILL KEEP YOU TURNING THE PAGES UNTIL THE SHOCKING CONCLUSION.

One of the grittiest, most authentic police thrillers you will read this year.

An edge-of-your-seat crime thriller starts with a vicious stabbing of a pretty teenage girl and her boyfriend on a local bus. She happens to be the mayor’s niece. It’s the final straw for the community. The police are desperate to get results and decide on a risky course of action involving undercover infiltration of the notorious Effingell Estate.

Detective George Elms knows this hellish place extremely well, and his sharp investigative mind is put to work to solve the crime. The police are under immense media pressure and conveniently a local lowlife confesses to the attack. But George is not convinced. There are many layers of criminal and police motivation, and few people are what they seem.

Authentic, fast-paced, and with a touch of black humour, you won’t want to put down BODILY HARM till the nail-biting conclusion.

Who can you trust? And when his family is put at risk will DS George Elms go beyond the law?

If you like Angela Marsons, Rachel Abbott, Mel Sherratt or Mark Billingham you will be gripped by this exciting new crime fiction writer.

BODILY HARM is book one of a new series of detective thrillers.

THE SETTING
Langthorne, typical of many smaller seaside towns dotted around the UK's coastline. Once a thriving tourist destination, where the affluent built grand seafront houses, it has suffered a hard fall from grace. Unemployment has blighted the area and so has crime.

THE DETECTIVE
George Elms joined the police pretty much straight out of school and now in his mid-thirties, he’s been getting in the faces of criminals for over fifteen years. Well known and respected on both sides of the line he is now responsible for running a team who work the crimes that come out of one of the county’s most notorious housing estates. He is married to Sarah and they have a little girl.
Posted by NOT SO NOBLE BOOKS at 05:10 No comments:

A COUPLE IS FOUND DEAD IN THEIR CAR ON A REMOTE NATURE RESERVE. WHAT DID THEY KNOW THAT WOULD MAKE SOMEONE KILL TO KEEP THEM SILENT? https://www.amazon.co.uk/dp/B01NBU5061
https://www.amazon.com/dp/B01NBU5061Full of twists and turns, this crime thriller will keep you turning the pages until the stunning conclusion.Sylvia and Ted Armitage, a retired couple, attend the wrong funeral service by mistake. A month later their daughter returns from holiday to find them missing.The police make little headway in tracing their whereabouts until their bodies are found in their car, abandoned in the middle of a copse in a tranquil nature reserve. They appear to have committed suicide, but some of the forensic evidence suggests otherwise. The police slowly make progress and find several links to a shady organisation that owns a string of bars, clubs and cafes. When another body is found in the same area, DCI Sophie Allen must use all her investigative skills to unravel the connections between these very different victims. Some of the suspects are involved in shady deals and corruption, others are masking dark family secrets. Sophie is joined by two new police officers, Rose Simons and George Warrander, who will transform her team.If you like Angela Marsons, Rachel Abbott, Colin Dexter, Ruth Rendell, or Mark Billingham you will be gripped by this exciting new crime fiction writer.TWISTED CRIMES is book five of a new series of best-selling detective thrillers featuring DCI Sophie Allen, head of the Violent Crime Unit in Dorset. THE DETECTIVESDCI Sophie Allen is Dorset’s acknowledged expert on murder and violent crime. She is 42 as the series starts, and lives with her husband and younger daughter in Wareham. Her elder daughter is studying in London. Sophie has a law degree and a master’s in criminal psychology. Her brilliant mind conceals some dark secrets from her past. DS Barry Marsh is based at Swanage police station. He's quiet, methodical and dedicated, the perfect foil for Sophie's hidden fragility.THE SETTINGDorset. A beautiful English county which includes a stunning section of the coastline, but whose beauty belies darkness beneath the surface.DISCOVER YOUR NEXT FAVOURITE MYSTERY SERIES NOWBook 1: DARK CRIMESA young woman’s body is discovered on a deserted footpath in a Dorset seaside town late on a cold November night. She has been stabbed through the heart.Book 2: DEADLY CRIMES A young man’s mutilated body is found on top of the Agglestone, a local landmark on Studland Heath.Book 3: SECRET CRIMESThe body of an attractive festival-goer is discovered on the rocky shoreline at Peveril Point.Book 4: BURIED CRIMESDevastating family secrets from the past. Sisters with a murderous rivalry . . .
Posted by NOT SO NOBLE BOOKS at 13:00 No comments: