DOMBEY AND SON by Charles Dickens 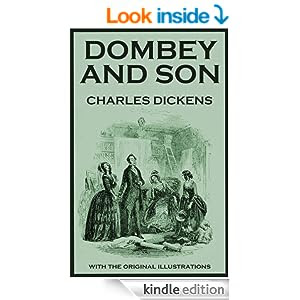 
The Definitive Edition of DOMBEY AND SON
-with the 40 original illustrations by Phiz
-Complete, unabridged, and formatted for kindle to improve your reading experience
-Linked table of contents to reach your chapter quickly

“Like all great Dickens novels it has really satisfying baddies. Dombey and Son has all the satirical indignation of Dickens’ early fiction – but new shades of darkness and a new narrative complexity. Halfway through his career, it was his first great novel.” John Mullan, The Guardian

“Rereading this book has convinced me that this book is a masterpiece. So beautifully and complexly structured, so full of clear-eyed depiction of suffering and loss. Standout sections: the slow disintegration of a marriage, as husband and wife bring out the emotional knives, and Carker's nightmare flight across France and England, only to confront the shadow he's been fleeing in a rural train station. Wonderfully rich” Leslie

“This must be one of my favorite books of all time. Every moment I had to spare, I went back to my kindle to read this book. It had been so long since I had read Dickens that every wonderful description took my by surprise. I had forgotten his hilarious and painfully true readings of other people.” Jeni

“When the fifth installment of Dombey and Son was published in 1847, the entire nation of England was apparently prostrated by grief. William Thackeray, who was in the middle of serializing his novel Vanity Fair, was prostrated by envy. His verdict: “There’s no writing against such power as this — one has no chance!” Radhika Jones, Time Magazine

DOMBEY AND SON features the classic novel by Charles Dickens in a specially designed edition for kindle. This masterpiece will intrigue and delight you. Read it as it’s meant to be read: complete, and unabridged with all the original illustrations.
Show less
Posted by NOT SO NOBLE BOOKS at 01:48