THE BROTHERHOOD OF THE SEVEN KINGS by L.T. Meade and Robert Eustace 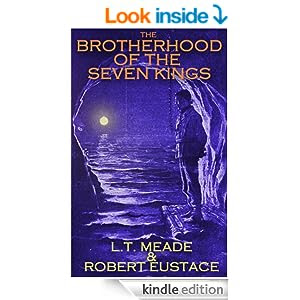 -Featuring all the original illustrations by Sidney Paget
-Complete, unabridged, and formatted for kindle to improve your reading experience
-Linked table of contents to reach your chapter quickly

A CLASSIC CRIME THRILLER FROM THE AGE OF SHERLOCK HOLMES

“The Brotherhood of the Seven Kings features what may well be the world’s first female diabolical criminal mastermind, Madame Koluchy, who runs a secret society, The Brotherhood of the Seven Kings. Written in 1899, it was one of many collaborations in the mystery genre between L. T. Meade and Robert Eustace . . . There are fiendish plots, ingenious murder attempts, death by X-Ray, and infernal machines. Highly recommended.” –VintagePopFictions

“If you like Sax Rohmer's Dr. Fu Manchu series, you will enjoy these stories. A little lighter but a nice read.” James
“You're really missing something if you haven't tried any of these mystery stories by L. T. Meade and Robert Eustace.” S.L.

“Madame Koluchy is the head of the Brotherhood of the Seven Kings, a secret society. She is evil through and through, responsible for horrible crimes. The narrator, Mr. Head, fell in love with her in 1884, then fled from her and the Brotherhood to England. Ten years later she appears in England as a worker of wonder cures. In this guise she has insinuated herself into London's High Society and is the talk of the town. When the narrator encounters her again he knows who she is, and she immediately recognises him--and so the duel begins. The Brotherhood of the Seven Kings is a neat little adventure story with an interesting villainess.” Encyclopedia of Fantastic Victoriana

THE BROTHERHOOD OF THE SEVEN KINGS features the classic mystery/thriller novel by Robert Eustace and L.T. Meade in a specially designed edition for kindle. Read it as it’s meant to be read: complete, and unabridged, with original period illustrations.
Posted by NOT SO NOBLE BOOKS at 09:55

Email ThisBlogThis!Share to TwitterShare to FacebookShare to Pinterest
Labels: classic crime fiction kindle ebook, THE BROTHERHOOD OF THE SEVEN KINGS by L.T. Meade and Robert Eustace