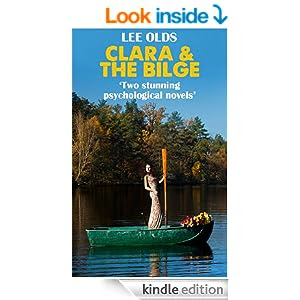 
Two Short Novels by the West Coast Literary Legend in One Stunning Collection
CLARA
A writer becomes besotted with a woman with whose help he thinks he will reach publishing fame. A tense psychological novel set in contemporary California.

“Clara is a stunning tale of a writer finding inspiration, Lee Old's prose is pellucid and hard-won. A cracking read for anyone.” Mary O’Toole

THE BILGE
A ménage-à-trois quickly deepens into a gripping play of wits where everything is at stake. A suspenseful psychological novel set in Sausalito, San Francisco Bay.

“One of the best novels I’ve read in years...it says more in sixty pages than most books do in six hundred.” San Francisco Examiner

“The Bilge is simply a great novel.” San Francisco Review of Books

“The Bilge, philosophical fiction of a sort rarely attempted by Americans, though depressing in its conclusions, is exhilarating in its execution.” Newsday, NY

Critical Acclaim for Lee Olds, Best-selling author of 1960’s classic ‘Too Much Sun’


NEWSDAY, NEW YORK
“THE BILGE” is a short, gloomy, seductive allegory that expresses the despair that men and women of good will sometimes feel when pondering the world of greed, exploitation, oppression and hopelessness that confronts them. Archetypal characters – Richter, the narrator, a reactionary lawyer, rigid, bitter, anti-Semitic; Peters, the Bohemian writer whose lifestyle eats at the foundations of Richter’s beliefs; the Professor, the iconoclastic Jewish intellectual Richter envies and abominates; the Goddess, the Professor’s beautiful, dependent, destructive, drunk wife – argue incessantly in an unearthly Sausalito, as graphically corporeal as the character’s habitation but strangely undescribed. Through murder and mayhem, we never escape the bitter confines of Richter’s mind. “The Bilge,” philosophical fiction of a sort rarely attempted by Americans, though depressing in its conclusions, is exhilarating in its execution.

DAVID VOLPENDESTA, SAN FRANCISO EXAMINER
Lee Old’s novella, “THE BILGE,” has an electricity so intense you can almost hear it crackle on the page. Narrated by one of its four central characters, Richter, a yuppies lawyer with a penchant for racism and anti-Semitism, the story plunges us into the word of the Professor, a university mathematician, his alcoholic wife, the Goddess, and Peters, a booze-crazed writer living in a ‘60s time-warp. On the surface, the relationship between the characters pivot off the mounting tension between Peters and the Professor as they try to drain the water from the bilge of a sunken houseboat where Peters had been living.

Just below the narrative surface, the author ingeniously implants the psychological dynamite. As events evolve, it becomes evident that all four characters are a composite gestalt of modern society’s collective death wish.

Lee Olds is a thinking person’s writer. Not only can he condense into 69 pages what many writers can only dream of achieving in 669, but his ability to integrate a mathematician’s sense of precision with a philosopher’s sensibility for metaphysical pathos is as impressive as it is stimulating. Here is a writer to watch.

PRAISE FOR TOO MUCH SUN (also available on Amazon)
“By Kerouac out of Salinger . . . The pioneer of a new post-Beatnik generation.” New York Herald Tribune

“Rowdy, wild and bawdy. Barry is as engaging as Holden Caulfield and as believable.” Book of the Month Club

“TOO MUCH SUN is an amazing book, remarkable, brilliant! It plunges the reader into the thoughts and yearnings of a generation that begins where Catcher in the Rye leaves off.” Worcester Telegram
Show less
Posted by NOT SO NOBLE BOOKS at 03:45