RUIN NATION on sale now, only 99p /cents for a limited time only, apocalypse fiction 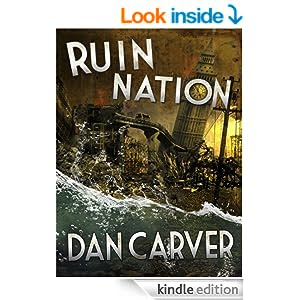 
“A great read, well written, and with an unforgettable story.” Chris Child (author of ‘Heckle’) “I couldn't put this down. A wild adventure in the dark reaches of an all too possible future. Dan Carver is a fantastic new talent.” Greg Reacher England is cut off and has entered a dark post-apocalyptic future. Evil politicians, who will stop at nothing, battle for control over the helpless population who are terrorized by marauding leopards. Enter former army surgeon Hugo Jupiter, who gets caught up in the course of history. He fights to overthrow the corrupt regime and establish his own. Will he succeed or will his very flawed character lead to an even worse future?
Posted by NOT SO NOBLE BOOKS at 08:59