THE RAINBOW and WOMEN IN LOVE by D. H. Lawrence 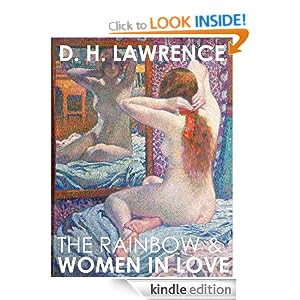 THE TWO PARTS OF D. H. LAWRENCE’S MASTERPIECE TOGETHER AT LAST


“These two novels about the passionate Brangwen sisters’ quest for liberation were always meant to be published together. Finally Lawrence’s great novels are reunited in a well formatted and beautifully presented edition.” Classic Romance Fiction

Includes complete and unabridged the two novels:
THE RAINBOW
WOMEN IN LOVE

“One of the 1000 novels everyone must read.” The Guardian

“The greatest imaginative novelist of our generation” E. M. Forster

“I truly loved this book and I am forever in love with D.H. Lawrence because of it. I was literally hooked from the first page. One of my favorite things about this book is how quickly it moves.” Katy

“The Rainbow follows the turbulent lives and loves of three generations of the Brangwen family of Marsh Farm in Lawrence's native Nottinghamshire . . . like its equally controversial sequel Women in Love, is remembered by most of its readers for the sex. It remains potentially dangerous reading for romantically inclined teenagers” Lisa Allardice, The Guardian

THE RAINBOW is one of Lawrence’s greatest novels, which was banned for obscenity in 1915, and is now available to read complete and uncensored. The author of Lady Chatterley’s Lover explores the themes of personal and sexual liberation with exquisite sensitivity.

PRAISE FOR WOMEN IN LOVE
“Instead of chopping yourself down to fit the world, chop the world down to fit yourself.” D. H. Lawrence, ‘Women in Love’

“One of the 1000 novels everyone must read” The Guardian

“As for Lawrence himself, he has become almost totally synonymous with sex – an earthy, unrestrained, would-you-let-your-servants-read-it kind of sex” Gerard Gilbert, The Independent

“The two greatest novels written in English in the 20th century were published within a year of each other, DH Lawrence's Women in Love in 1921, James Joyce's Ulysses in 1922” Howard Jacobson

'Women in Love is a work of genius. It contains characters which are masterpieces of pure creation' New Statesman

“One of my favourite books, and his most acclaimed novel is Women in Love. Nihilism, death, love, and modernism all rolled into one.” Valentina Zannoni

WOMEN IN LOVE is the sequel to The Rainbow continuing the story of the Brangwen sisters, Gudrun and Ursula. It has been adapted for the screen several times most notably in the notorious 1969 British film directed by Ken Russell starring Alan Bates, Oliver Reed, and Glenda Jackson.
Posted by NOT SO NOBLE BOOKS at 09:39

Email ThisBlogThis!Share to TwitterShare to FacebookShare to Pinterest
Labels: THE RAINBOW and WOMEN IN LOVE by D. H. Lawrence kindle ebook