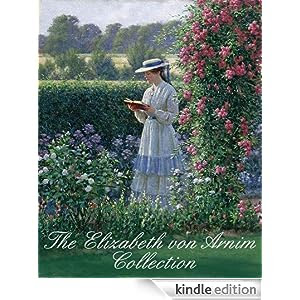 THE ELIZABETH VON ARNIM COLLECTION
-Illustrated with beautiful period illustrations and photos
-Includes 7 of her best books, complete and unabridged
-Formatted for kindle with easy navigation between books


“Elizabeth von Armin has a genius for writing brilliant novels. If you know her books then you will find this a great value collection, if you’re new to her work then you’re in for a real treat”' Literary Classics

“If you're like me, you had never heard of Elizabeth von Arnim until the recent episode of PBS' smash hit Downton Abbey, when a valet gave a copy of Von Arnim's Elizabeth and Her German Garden to his love interest. Von Arnim, however, was a hugely popular author during the Edwardian era depicted on the show, and her first novel Elizabeth and Her German Garden, published in 1898, was a spectacular success that underwent repeated printings.” Fine Books & Collections