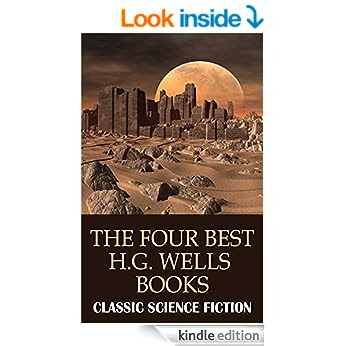 4 of the most sensational books of all time
-Illustrated with classic and vintage images
-Complete, unabridged, and formatted for kindle to improve your reading experience
-Linked table of contents to reach your book quickly

PRAISE FOR THE TIME MACHINE
“Without "The Time Machine," we might not have science-fiction. Or at least not as we know it.” Michael
“The Time Machine, probably one of the half-dozen or so most important works in the entire history of science fiction, and a book that is a joy to read again and again.“ Paul Kincaid

THE INVISIBLE MAN
“A corking good read! Just great old-fashioned yarning! Being invisible isn't nearly as much fun as it sounds. In fact it's downright inconvenient. And hazardous, to boot. “ Jeanette
“I recommend The Invisible Man to fans of sci-fi novels, because this is classical sci-fi! Not to mention, the "Father of Sci-Fi" wrote this story. Wells filled this story with chaos, suspense, insanity, and curiosity pickers, making the book quite a page turner.” Rebecca

THE ISLAND OF DOCTOR MOREAU
"The Island of Dr. Moreau takes us into an abyss of human nature. This book is a superb piece of storytelling." V.S. Pritchett
“Much creepier than I expected and much smarter, The Island of Dr. Moreau, as with so much of H.G. Wells' science fiction, addressed the ethical pitfalls of a scientific eventuality far too early to be anything other than prophetic, yet it still manages to be more entertaining than preachy.” Brad

WAR OF THE WORLDS
“All of which makes it far more satisfying than a straight, pulpy, alien invasion drama – a true classic that has pointed the way not just for science-fiction writers, but for how we as a civilisation might think of ourselves.” Ben East, The Observer
Posted by NOT SO NOBLE BOOKS at 03:23