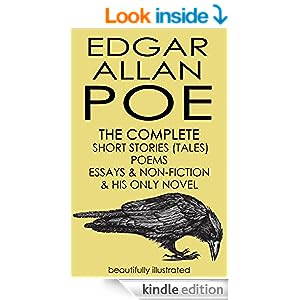 -With beautiful illustrations as well as historical images from the life of Poe
-Complete, unabridged, and formatted for kindle to improve your reading experience
-Linked table of contents to reach your book quickly

INCLUDES ALL OF POE’S SHORT STORIES (TALES): over 60 short stories For example:
"The Fall of the House of Usher"
"The Masque of the Red Death"
"The Pit and the Pendulum"
"The Purloined Letter"
"The Tell-Tale Heart"
ALL OF HIS POEMS
For example:
"The Raven"
"Ulalume"
"To Helen"
"Lenore"
HIS ONLY NOVEL "The Narrative of Arthur Gordon Pym of Nantucket"
PLUS HIS ESSAYS as well as biographical essays on Poe
AND HIS FULL-LENGTH NON-FICTION PIECE: EUREKA

PRAISE FOR EDGAR ALLAN POE ''Poe is one of the writers who make us who we are.'' E. L. Doctorow

“Edgar Allan Poe is like a ghost haunting American culture, inhabiting the dark corners and lonely spaces of so many genres and art forms. Although he was not at first accorded respect by the literary establishment of America, his spirit has outlasted his critics.” Edward Pettit, Las Vegas Weekly

“No library is complete without Mr. Poe. There is no other author or poet that quite captures the outré with such lush, black elegance. Everyone is familiar with the captivating, uncomfortably engrossing horror tales such as "The Pit and the Pendulum" and "The Red Death": stories that draw you into the depths of plain human terror, both logical and superstitious, real and imagined.” Natalina

“Yet there can be no doubt that Poe left a deep mark on literature. He invented both the detective story ("The Murders in the Rue Morgue") and the sequel to the detective story ("The Mystery of Marie Roget" and "The Purloined Letter"). An attraction to new technologies and cutting-edge ideas such as hot-air balloons, mesmerism, and cryptography made him a pioneer of science fiction.” John Miller, Wall Street Journal
Posted by NOT SO NOBLE BOOKS at 05:11